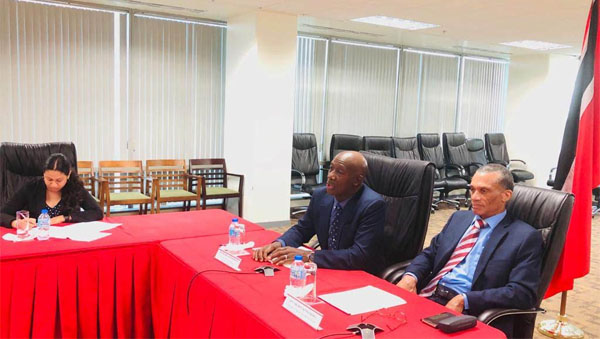 Trinidad and Tobago Prime Minister, Dr. Keith Rowley, and Minister of Foreign and CARICOM Affairs, Denis Moses, seen participating in the CARICOM video conference, today, during a special emergency meeting, where the ongoing crisis in Venezuela was discussed.

PORT OF SPAIN, Trinidad and Tobago, January 24, 2019 (CMC) – Leaders from across the Caribbean Community (CARICOM) met, via video conference, today, in a special emergency meeting to discuss the ongoing crisis in Venezuela.

While CARICOM is yet to issue an official position on the situation in Venezuela, several countries in the region have already taken a stance on the crisis in the South American nation.

In the case of Jamaica, the Ministry of Foreign Affairs says the government is closely monitoring the latest developments in Venezuela.

The government of Guyana says it is gravely concerned at the deepening of the political crisis and supports calls, made at both the regional and international levels, for immediate dialogue, involving all political and social actors, with a view to the preservation of the democratic process and a return to normalcy.

Since then, President Nicolás Maduro, who retains some other nations’ support, broke off relations with the United States.

Maduro has been in office since 2013. He was sworn in, for a second term, earlier this month, after winning a May 2018 election, marred by an opposition boycott and widespread claims of vote-rigging.

Earlier this month, Jamaica, Haiti, the Bahamas, Guyana and St. Lucia supported a resolution, by the Organisation of American States (OAS), in not recognising the second five-year term of President Maduro, while Dominica, St. Vincent and the Grenadines and Suriname voted against the measure.

St. Kitts-Nevis, Trinidad and Tobago, Antigua and Barbuda, Barbados, and Belize abstained during the vote, while Grenada was not present when the matter was put to the vote.