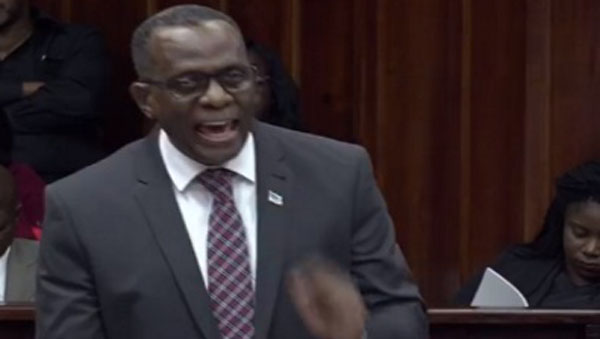 Opposition Leader In St. Lucia Files Motion Of No Confidence Against Prime Minister

CASTRIES, St. Lucia, January 29, 2019 (CMC) – Opposition Leader, Phillip J. Pierre, today, accused Prime Minister, Allan Chastanet, of being an “uncaring, reckless leader”, as he called on the 17-member parliament to support a motion that would result in Chastanet’s removal as head of the St. Lucia government.

In a more-than-two-hour presentation, punctuated by challenges and rulings by government legislators and the Speaker, Andy Daniel, the leader of the main opposition St. Lucia Labour Party (SLP), said that the policies of the government, since it came to power in 2016, have led to the socio-economic bankruptcy of the island and its inhabitants.

Pierre added that the motion of no confidence is not intended to embarrass Chastanet, nor should it be viewed as a personal attack on him.

“It is a watershed moment for members of this House to answer the question: should the member for Micoud South (Chastanet) be allowed to lead this country for the balance of Parliament, given his dismal performance, to date — a performance that is uncaring, reckless and irresponsible? Pierre, a former acting prime minister, asked legislators.

“It is also a call to members of this House to examine the evidence before them and to do so with the best interest of the country in mind.”

He argued that the motion is also providing government legislators with an opportunity to be “men and women with integrity, by declaring, publicly, what they say privately, about the prime minister’s dismal performance, and to place country above self”.

“This is the challenge before members today,” Pierre said, noting that the policies of the ruling administration had, over the months, have also resulted in a “lack of public trust and confidence”.

Pierre noted that since the government’s coming to office, many persons had lost their jobs as a result of the vindictive policies of the prime minister, whom, he said, had gone on a borrowing spree that would result in generations of St. Lucians having to repay the money borrowed.

Earlier, government legislators had sought to prevent the matter being debated, with Economic Development, Housing, Urban Renewal, Transport and Civil Aviation Minister, Guy Joseph, claiming that the motion “is not in keeping with the Standing Orders”.

I would love to see, Mr. Speaker, where in the Standing Orders or the Constitution that there is that authority to move a motion of no confidence in an individual in this parliament,” Joseph added.

But the Speaker in his ruling noted that “the only way the Leader of the Opposition can…put the motion in a particular context, he would have to refer to the member, who is and who happens to be the prime minister of this country”.

The debate is continuing.