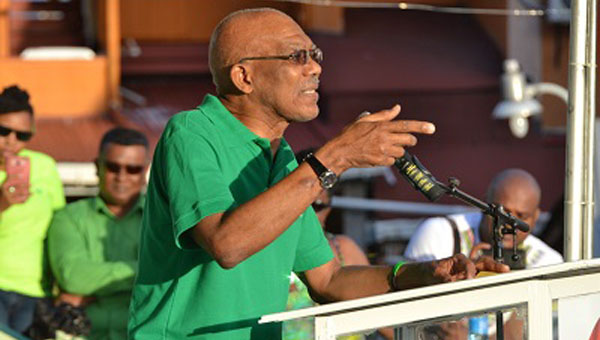 Guyana President, David Granger, in his Republic Anniversary message to the nation, last Saturday, pointed out that “Everyone wins when the nation is united.”

GEORGETOWN, Guyana, February 4, 2019 (CMC) – President David Granger appealed, yesterday, to supporters to re-elect his coalition government, even as he pledged not to resign, despite the December 21, 2018 vote of confidence that tumbled his three-and-a-half year old administration.

Last week, the High Court ruled that the motion of no confidence — filed by Opposition Leader, Bharrat Jagdeo, supported by then-government back bencher, Charrandass Persaud, and passed by the parliament, in a 33 to 32 vote — was valid.

The A Partnership for National Unity (APNU)/Alliance For Change (AFC) coalition had previously enjoyed a one-seat majority in the 65-member National Assembly, and the main opposition, People’s Progressive Party (PPP), has since called on Granger to announce a date for the polls, in keeping with the Guyana Constitution, that an election must be held, 90 days after the successful motion of no confidence in the government.

The government has indicated, in a statement, that it intends to appealth High Court decision, and will not resign.

As he addressed supporters at Vreed-en-Hoop in Region 3, West Bank Demerara, on Sunday, Granger acknowledged that his administration is faced with a challenging situation, albeit, not of its own making.

But he pledged “we will rise to this challenge again,” telling supporters that while the government cannot reverse what happened in the National Assembly, Guyana must press on.

“The Speaker has spoken, and we respect the Speaker, and we also have spoken. We met with the opposition, and we agreed that that National Assembly has work to do. I have not dissolved Parliament, neither have I resigned,” the President told the rally.

“There is no such thing as an interim government or caretaker government. According to the Constitution, I remain President, until the next president is sworn in,” Granger said, adding that an estimated 207,200 Guyanese went to the polls in May 2015 and registered their support for the coalition.

“The same must be done this time around. The work must be completed. You elected us to do a job, let us finish the job. Give us a chance to finish the job. Put us in the driving seat, and you will see the transformation, the change in every region,” Granger said.

He told the public meeting that his coalition administration remains a legal, legitimate government and nothing done so far is outside the rule of law.

He promised that whatever decisions are made in the courts will be followed, by due process, and that the government will move to every stage, until it has exhausted every element and aspect of the law.

President Granger said the actions of Persaud, in voting with the PPP to bring down the government, were “undemocratic, cruel and callous”, adding that the former government legislator had failed to consult with his constituents.

“We must not relent. We must ensure that every person in West Demerara is registered. We will support you, we will protect you, and we will guarantee your rights. Bring more persons into our organisation; let them know they have a home.”

Granger said that there had been a definite transformation brought to Guyana in the last three and a half years.

He said prior to his administration taking up office, pensioners were receiving a mere GUY$7,500 monthly.