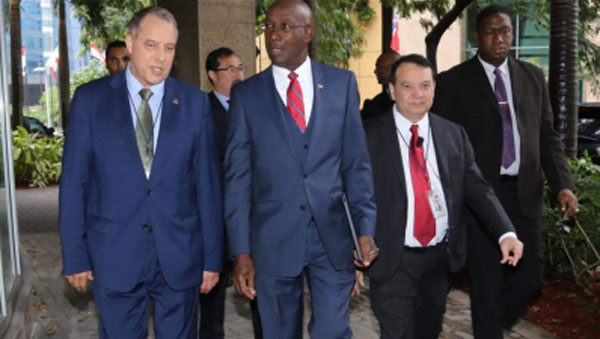 PORT OF SPAIN, Trinidad and Tobago, February 4, 2019 (CMC) – The Trinidad and Tobago government said, today, it is prepared to assist its fellow Caribbean Community (CARICOM) countries develop their hydrocarbon sector, as it placed much emphasis on the importance of technology in developing its own industry.

Prime Minister, Dr. Keith Rowley, addressing the 2019 Energy Conference and Trade Show, hosted by the Energy Chamber of Trinidad and Tobago, said that the structure of the Caribbean region testifies to the extremely unstable condition of the terrestrial crust of this intercontinental and, simultaneously, inter-oceanic area.

He said in the recent geological epoch, the Caribbean region is represented by a series of structural elements, the main of which are the Venezuelan and Colombian deep-sea sub-oceanic depressions, the Nicaraguan Rise, and the Greater and Lesser Antilles, bordering the Caribbean Sea in the North and East.

Rowley told delegates that a 2012 report, by the United States Geological Survey of 31 priority geological provinces in South America and the Caribbean, assessed the un-discovered conventional hydrocarbon potential at 126 billion barrels of crude oil and 679 trillion cubic feet of natural gas.

He said in the Guyana-Suriname province the crude oil potential was assessed at 13.6 billion barrels and natural gas at 21 trillion cubic feet.

Rowley revealed that the study also assessed the potential of the Tobago Trough, which is located north of Block 22, between Tobago and Grenada (the Grenada Trough) and the Barbados Accretionary Prism to the East.

Rowley told delegates that the findings of the US Geological Survey have been validated by the hydrocarbon discoveries in Guyana’s deep-water.

“As a consequence, there has been great interest, by major upstream companies, in conducting exploration for hydrocarbons in the territorial waters of Barbados, Jamaica, Suriname, Bahamas and Grenada.”

He said Trinidad and Tobago, with its technical expertise, capacity and experience, has offered to assist member CARICOM states in the development of their hydrocarbon resources and, in this regard, Port of Spain has executed memoranda of agreement for the provision of technical assistance in the energy sector with the governments of Guyana and Grenada.

“It is my sincerest hope, that in the clamour for the elusive “secret information”, to which everyone is entitled, that these standard operational procedures, some of which must, of necessity, carry confidentiality clauses, do not fall victim to the abandonment and withdrawal of enthusiasm on any of these very valuable initiatives,” Rowley stated, adding that preliminary discussions have been held with the Barbados government, with the view to the establishment of such an agreement.

He explained that technical teams from Trinidad and Tobago and Barbados are to be appointed to develop the necessary memorandum of agreement.

Rowley said that Trinidad and Tobago is well poised to service the industry requirements, emanating from the development of emerging hydrocarbon economies in the Caribbean.

He noted that the existing facilities, here, will be supplemented by a maritime business, anchored on a dry-docking facility at La Brea, south of here.

“The facilities, upon completion, are anticipated to comprise a large container and bulk transfer terminal for a trans-shipping business, and an outfitting terminal for a ship building, dry-docking and repairing business. It will have a deep-water port, with a capacity to handle drill ships, Panamax vessels, rig supply vessels, offshore construction support vessels and other energy services.”

But he said, notwithstanding, anything else that Trinidad and Tobago might be engaged in, the energy sector remains pivotal in the country’s socio-economic development.

Rowley said gas production has eclipsed oil production and is the dominant hydrocarbon, “but we will keep on being aggressive in expanding our oil business. In the early years of the domestic industry, oil was king and gas was considered as a by-product to be flared.

“While gas production flourished oil production stagnated and languished. At present, oil production is at a low of approximately 66,000 barrels per day, with two-thirds of the production coming from state-owned company, Heritage Petroleum Company, which acquired the petroleum production responsibilities of PETROTRIN,” he said.

Rowley said that the former state-owned oil company, which held most of the country’s oil reserves, was mainly responsible for the drastic decline in oil production, as much-needed capital was diverted to other parts of the business, which, in several instances, offered little or no financial returns.

But he said the transition from Petrotrin to the new business model, comprising a holding company, Trinidad Petroleum Holding Company Limited, and subsidiaries, Heritage Petroleum Company Limited, Paria Fuels Limited, and Guaracara Refining Limited, “has been orderly, relatively uneventful, and the haemorrhaging that characterized the operations of Petrotrin, has been arrested”.

He said given, the importance of the domestic energy sector, his administration has focused on creating stability and, where necessary, reforms within the sector, in order to optimize its contribution to the national economy.

“As we move forward, we would wish to deepen our relationships with the upstream companies, many of whom are involved in research and development, on their own, or indirectly, through academic institutions. While Trinidad and Tobago has benefited from the application of technology, there has not been any serious investment in research and development for the oil and gas industry in this country.  In today’s globalized world, a country’s prosperity depends on its ability to generate new ideas and convert knowledge into socio-economic benefits.”

Rowley explained that technology enhances these capabilities and provides a platform, on which a country can build its economic development.

“However, Trinidad and Tobago has lagged behind in research and development. As a consequence, there has been limited production and export of high technology products,” he continued, noting that a 2015 World Bank Report on high technology exports from developing countries, showed that the country had occupied the cellar position of the study group, with its high technology exports representing 0.1 percent of total manufacturing exports.

“Therefore in our 2030 Vision, we have identified this as one of the priority areas that needs to be addressed. Accordingly, we will be promoting, among our citizenry, a culture of innovation, and an increased level of investment in research and development, by both public and private sectors.”

The Prime Minister revealed that the government intends to engage the major oil and gas companies and domestic educational institutions, including the University of the West Indies (UEI) and the University of Trinidad and Tobago  (UTT), in effecting a strategy to promote and finance research in technology, relative to the oil and gas industry.

“We are at critical juncture of our development.  The platform, on which our economic development has been based, has been subject to a volatility that is unrelenting and threatens our stability. In the circumstances, we need to be a cohesive group, working together for our mutual benefit.

“The oil and gas industry is a close knit community in Trinidad and Tobago. We are operating in a challenging environment and, therefore, we need to be more collaborative, by sharing risks, establishing joint ventures and adopting technology which allow for increased productivity, real time information dissemination and decision making,” he announced.

Rowley acknowledged that there has been collaboration, but in a too limited number of instances.

“We need to expand the level of collaboration, to maximize the level of hydrocarbon output.  Given the changing global energy landscape, we cannot afford to have hydrocarbon resources that remain un-exploited, due to scheduling issues. The legal and regulatory systems provide for such collaboration. There is no reason why we cannot work together for a better outcome.

“Time is of the essence. Let’s have more considered action and less talk.  Moving forward, the key challenges for the industry will be to reduce costs, adhere to environmental standards and to continue to discover new methods, while achieving high levels of efficiency. A steep challenge, but achievable,” he told the energy conference.