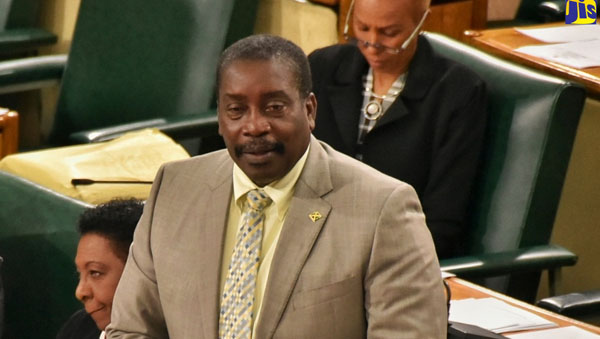 Jamaica's Minister of Transport and Mining, Robert Montague, delivers a statement in the House of Representatives, on Tuesday (February 5). Listening are Minister of Culture, Gender, Entertainment and Sport, Olivia Grange (left); and Minister without Portfolio in the Finance and the Public Service Ministry, Fayval Williams.

KINGSTON, Jamaica, February 7, 2019 (CMC) – The Jamaica government has confirmed that the United States has lifted the sanctions, imposed on the Russian-owned, UC Rusal, the parent company of the West Indies Alumina Company (Windalco).

Transport and Mining Minister, Robert Montague, in a statement to Parliament, on Tuesday, said that the sanctions were lifted on January 27.

He noted that US President, Donald Trump, had indicated his intention to lift the sanctions in December 2018.

Montague explained that as a result of the decision by Washington, entities in Jamaica can freely do business with Windalco, without the threat of direct and/or secondary sanctions.

He said that UC Rusal has agreed to “unprecedented transparency into its operations, by undertaking extensive, ongoing auditing, certification, and reporting requirements”.

In addition, independent persons will control a significant bloc of the shares of the En+ Group Ltd., which is UC Rusal’s parent company.

On April 6, 2018, the United States Department of the Treasury’s Office of Foreign Assets Control (OFAC) imposed various sanctions on Russian oligarch, Oleg Deripaska, and several companies that were wholly or primarily owned by him.

“The sanctions resulted in the assets of UC Rusal that were within the US jurisdiction, being frozen and US persons being prohibited from having dealings with them. Further, non-US persons could face secondary sanctions, for knowingly facilitating significant transactions for, or on behalf of, Mr. Deripaska and with his companies,” Montague told legislators.

He said significant efforts were made by the Jamaica government towards mitigating the effects of the sanctions on the local economy.

He revealed that through his Ministry and the Ministry of Foreign Affairs and Foreign Trade, applications were made to the relevant US authorities for waivers to conduct business with UC Rusal, with a view to sustaining the operations of Windalco, towards preserving the livelihood of the citizens and preventing any major fallout in the economy.

Montague added that a formal response was received from OFAC, which stated that Jamaica was covered by General Licence No.14 and would not be the direct subject of sanctions.

“The Prime Minister (Andrew Holness), at a critical point, when all looked bleak, had a very productive meeting with the US Treasury Secretary. This meeting, along with the help of the US Congressional Black Caucus, and many others, contributed,” he told legislators.