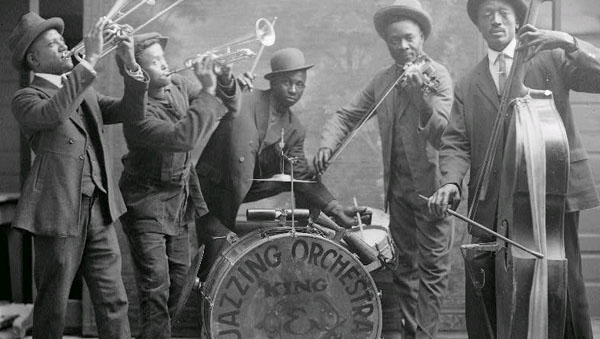 The King & Carter Jazzing Orchestra photographed in Houston, Texas, January 1921. At some point, jazz went from the music of youthful rebellion to that of the cultured elite. Photo by Robert Runyon, 1921.Via The Robert Runyon Photograph Collection, image number, 05020, courtesy of The Center for American History, The University of Texas at Austin., Public Domain, https://commons.wikimedia.org/w/index.php?curid=67890.

Jazz seems to be experiencing a bit of a renaissance among movie directors – look no further than documentaries such as “Miles Davis: Birth of the Cool,” which just premiered at the Sundance Film Festival, biopics such as “Born to Be Blue,” and recent Oscar winners like “Whiplash.”

While films about jazz are everywhere, evidence suggests that fewer people are actually consuming the music, putting the genre more on par with classical music than with today’s pop artists.

There are a host of reasons for the decline of jazz as a popular music, but the one that interests me as a music historian is the role that academics played.

In our attempt to elevate jazz to the ivory tower, we may have inadvertently helped to kill it as a popular style.

However, all is not lost. While the genre might seem destined for academic obscurity, jazz continues to kick around in popular music – just in subtler ways.

Jazz captivates the country
In the 1920s, during the early years of the Great Migration, waves of black Americans migrated from the South into the industrial cities of the North. Black jazz musicians, particularly those from New Orleans, brought their sound with them. They moved to neighborhoods such as The Stroll in Chicago, Black Bottom in Detroit, 12th Street and Vine in Kansas City and, of course, Harlem. This occurred just as the record industry blossomed and radios became mainstays in American homes.

Jazz was well-positioned to become the most popular genre of music in the nation. 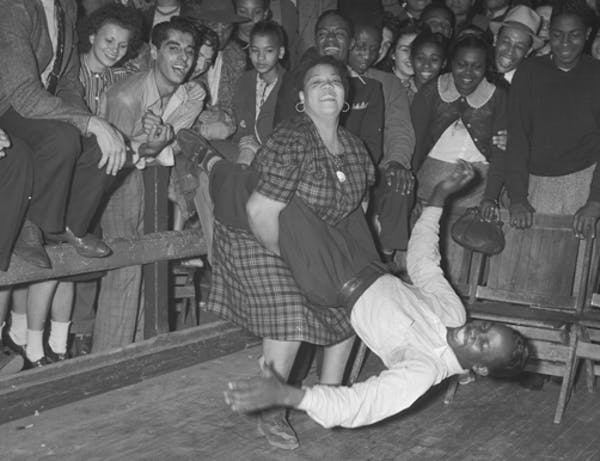 During the Swing Era, the Lindy Hop was a popular dance. Photo credit: UCLA.

Over the next decade, the genre underwent a transformation. Artists began to amass larger ensembles, fusing the energy of jazz with the volume of dance bands. The Swing Era was born, and jazz orchestras dominated pop charts.

These developments led to a new set of issues. Larger bands meant less freedom to improvise, the cornerstone of jazz. During the 1940s, music recordings became increasingly important, and jazz musicians found themselves frustrated with how little they were being paid, resulting in a series of strikes by the American Federation of Musicians.

By the time these problems were resolved, America’s youth had already begun gravitating toward new styles of R&B and country, which would eventually morph into rock ‘n’ roll:

After that, jazz never really recovered.

From the club to the classroom
Jazz underwent another, more subtle, shift during that same time period: It left the club and went to college.

After World War II, jazz genres fractured and the music became more complex. It also became popular among college students. Dave Brubeck Quartet released several albums in the early 1950s that acknowledged the group’s popularity with the college crowd, including “Jazz at Oberlin” and “Jazz at the College of the Pacific.”

Perhaps university administrators wanted to elevate a distinctly American genre to a status of “high art.” Or, maybe they just wanted to capitalize on jazz’s popularity among college students. Either way, universities started to create curriculums geared towards the genre, and by the end of the 1950s, several institutions, such as the University of North Texas and the Berklee College of Music, had jazz programs up and running.

In the classroom, jazz was explored in a new way. Rather than hearing jazz played while grinding on a dance floor, it became something to dissect. In one of the earliest jazz histories, “The Story of Jazz,” musicologist Marshall Stearns captures this shift. He begins his book by explaining how difficult it is to categorize the spirit of jazz. He then spends over 300 pages trying to do just that.

Popular culture began to reflect jazz’s shifting identity as the music of educated people. The 1953 film “The Wild One” features a bouncing big band soundtrack that underscores the shenanigans of a motorcycle gang led by Marlon Brando.

Just two years later, “Blackboard Jungle,” also features delinquent kids – except this time, they prefer the sound of Bill Haley. In one scene, their math teacher tries to get the kids to appreciate his collection of jazz records. The scene ends with the kids beating the teacher and breaking his records.

Jazz had gone from the music of youthful rebellion to that of the cultured elite.

During the 1960s, jazz may have been as eclectic as ever. But academics like historian Neil Leonard continued to push for jazz to be made into a serious subject of academic inquiry, as he argued in his book “Jazz and the White Americans.” Professional groups devoted to the study of jazz education were founded, such as the National Association for Jazz Education.

During the 1970s and 1980s, introductory jazz courses started to reach critical mass and led to the growth of what jazz critic Nate Chinen dubbed the “jazz-education industry.” Playing jazz required a college degree. Jazz had become the music of the educated. It was the music of Cliff and Clair Huxtable, one a doctor and the other a lawyer, from “The Cosby Show.”

Just don’t call it ‘jazz’
In the last 20 years, jazz’s identity as an academic art form has only grown. At my institution, almost all of the non-classical course offerings in the music school are about jazz.

Today, in any given semester on any given campus, you can find college students sitting in classrooms at 9 a.m. on a Tuesday trying to absorb the importance and complexity of a music meant to be heard in a club at 2 a.m. on a Saturday. It’s become brussels sprouts for budding music aficionados: You know it’s good for you, but it doesn’t necessarily taste all that great.

Outside of the classroom, a dwindling audience base has forced traditional jazz venues to play into the notion of jazz as an educated person’s music. The current iteration of Minton’s Playhouse, a club that was once a bastion of jazz energy, now calls jazz “America’s classical music” in an attempt to raise the profile of the genre (and perhaps justify the cost of the steaks being served there).

Other venues have minimized jazz. This year’s New Orleans Jazz and Heritage Festival will feature decidedly non-jazz artists such as Katy Perry, The Rolling Stones and Chris Stapleton.

Despite jazz’s distance from its popular roots, a little digging shows that we still like listening to jazz more than we think. We just stopped openly calling it jazz.

Kendrick Lamar’s 2015 album “To Pimp a Butterfly” is every bit as much a jazz album as it is a rap album, thanks to Lamar’s collaboration with the saxophonist Kamasi Washington. Washington also had a short film, “As Told to G/D Thyself,” based on his album, “Heaven and Earth,” at Sundance.

Lamar’s album was such a revelation that it inspired David Bowie to feature a jazz ensemble as his backing band for his final rock album, “Blackstar.”

Meanwhile, the music collective Snarky Puppy has become an international sensation by creating long-form jazz works while avoiding any specific labels. Another music collective, Scott Bradlee’s Postmodern Jukebox, has found a way to keep the sound of jazz alive – and to embrace jazz’s lighter side – by transforming contemporary pop songs into historical jazz genres.

With academia positioning jazz as art music, the genre is unlikely to experience a popular resurgence any time soon.

But today’s artists are proving that the spirit of jazz is alive and well, and that jazz is much more than its name.

Maybe this is fitting: The earliest jazz musicians didn’t call their music “jazz” either. Instead, they blended their sound with pre-existing pop genres, and, in doing so, created one of the most distinct forms of music in American history.

Adam Gustafson is an Instructor in Music at Pennsylvania State University.