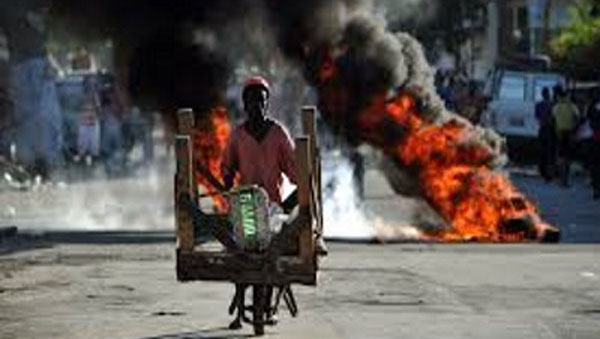 CARICOM Concerned About Violence In Haiti

GEORGETOWN, Guyana, February 13, 2019 (CMC) – The 15-member Caribbean Community (CARICOM) grouping has expressed concern at the violence in Haiti, where opposition parties have been staging street demonstrations, demanding the resignation of President, Jovenel Moise.

CARICOM chairman and St. Kitts-Nevis Prime Minister, Dr. Timothy Harris, said the regional integration grouping “is deeply concerned about the continuing violent protests in Haiti, which have resulted in the loss of life, property, destruction of infrastructure and caused grave distress.

“The Community calls for calm and a cessation of the violence, appealing to all involved to engage in constructive dialogue and to respect the Constitution, the rule of law and democratic processes, so that issues can be resolved in a peaceful atmosphere and allow for the return to a state of normalcy,” he said in a brief statement.

On Monday, the leaders of the various political parties and groups, adopted a common position, demanding the resignation of the president and his government.

“The country is not governed,” said opposition legislator, Senator Youri Latortue, adding it is not about the respect or not of the mandate of Jovenel Moïse.

“The observation is that the country is not governed. We cannot let the country go adrift with an incompetent person at its head,” he added.

Earlier this week, several Western countries condemned the “unacceptable acts of violence” in Haiti, and called on all stakeholders, including Haitian leaders, “to engage in a constructive and inclusive dialogue, in order to identify and implement realistic and lasting solutions to the political and economic”.

Opposition political parties have been staging street demonstrations in support of their calls for President Moise to step down, after accusing him of not investigating allegations of corruption in the previous government over PetroCaribe, an oil alliance of many Caribbean states with Venezuela, to purchase oil on conditions of preferential payment. They are also demanding fresh elections and jobs.

But Moise has dismissed the calls for him to resign.

Over the past few days, demonstrators have taken to the streets, burning tyres and sporadic gunshots were heard, forcing the closure of many businesses. Police also clashed with protesters, near the airport, and used tear gas to regain control of the situation. At least four people have been killed and police, today, reported that they were investigating reports that several prisoners had escaped.

Earlier this month, the President of the Superior Court of Accounts and Administrative Disputes (CSC/CA), Pierre Volmar Demesyeux, presented a copy of the report on the management of projects, financed by the PetroCaribe funds, to the Speaker of the Senate, Carl Murat Cantave.

Cantave has since presented the report to Senator Youri Latortue, the President of the Ethics and Anti-Corruption Commission.