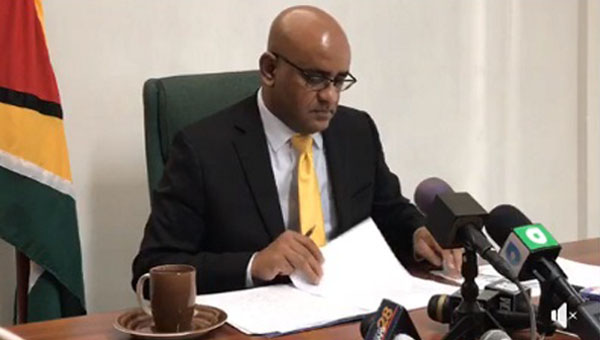 GEORGETOWN, Guyana, February 14, 2019 (CMC) – The main opposition People’s Progressive Party (PPP) said, today, it would call on the international community to impose sanctions on the Guyana government, if fresh regional and general elections are not held in the country by March 19.

The announcement by the PPP General Secretary and Opposition Leader, Bharrat Jagdeo, comes on the heels of a statement, by the Bar Council of the Guyana Bar Association (GBA), expressing concern that 54 days since the passage of the motion of no confidence in the coalition government, no date has been fixed for elections, within the required constitutional period or otherwise.

The Bar Association said the filing of appeals and applications for orders, staying the operation of the clear timelines fixed by the Constitution, cannot stop the time from running, within which elections must be held.

Jagdeo told a news conference “there is no date I have in mind, outside of March 19. We will not return to Parliament, unless it has to do with a finite date for elections”.

Jagdeo, on December 21 last year, successfully tabled a motion of no confidence against the coalition government, and has since called on the Guyana Elections Commission (GECOM) to ensure that the polls are held on March 19, in keeping with the 90-day requirement, as outlined in the Constitution after the passage of the motion or at a date agreed to by the National Assembly.

GECOM has already indicated that it is impossible to stage the elections within the constitutional time frame, given the measures needed to be implemented to ensure a free and fair election.

The Guyana government has since filed an appeal against the High Court ruling last month, that indicated the motion of no confidence was valid and refused to provide a conservatory order staying the elections.

Jagdeo told reporters that the PPP would not support any move by the government to extend the constitutional deadline, regarding the polls, and dismissed suggestions that the party could be viewed as being complicit in creating a constitutional crisis by insisting on the March 19 deadline.

“That is pure hogwash,” he said, adding “we must be complicit with APNU (A Partnership for National Unity) to violate the constitution by not doing anything within the 90-day period”.

He said that GECOM must first show good faith by working back the Claims and Objections related deadline of July, 2019, for training polling day staff and procuring sensitive materials, such as ballots, indelible ink and stamps.

“They can’t hope that they can come and ask us for an extension just like that,” Jagdeo said, adding also that he had no intention of meeting with President Granger on the issue.

I’m not seeking any meeting. He needs to comply with the constitution. We have a President, who is driving us into a constitutional crisis,” he said, warning that the opposition party would seek to lobby the international community to impose sanctions on the government for violating the constitution by employing delaying tactics.

“We will be calling on the international community for sanctions for violating democracy,” he said.

In its statement, the GBA said “Only a resolution of the National Assembly, supported by not less than two-thirds of all of its elected members, can extend the time for elections, if it is necessary to do so,”

The GBA said that GECOM, in accordance with the Constitution, is required to be in a state of readiness to conduct elections, at any time, within three months of the passing of a no-confidence motion in the National Assembly.

“The Bar Council therefore renews its call, on all parties concerned, including the President, the Leader of the Opposition and the Guyana Elections Commission, to take such immediate steps as will avoid Guyana entering into a constitutional crisis and prevent the dire effects such a crisis could have on the country.

“The Guyana Elections Commission and all other stakeholders required for the conduct of elections are bound by the operation of the Constitution, the supreme law of Guyana,” the GBA said.