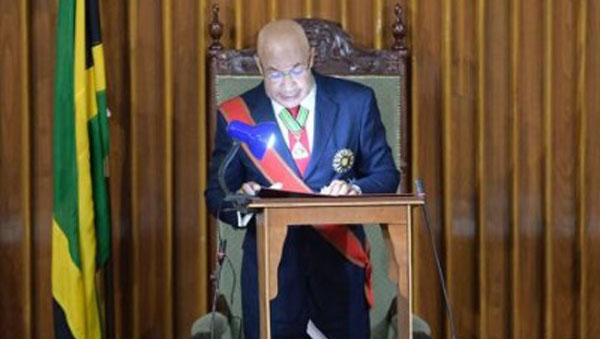 “Addressing crime and violence is one of the most challenging tasks that require practical initiatives, supported by robust legislative and policy frameworks,” Governor General, Patrick Allen, said, as he delivered the traditional Throne Speech.

Allen stated that the Andrew Holness government is committed to instituting stringent measures to disrupt criminal networks and protect the country’s borders, and meet the challenges of the future, by embracing technology and improving intra- and inter- cooperation and coordination.

He told legislators that as part of the “Plan Secure Jamaica”, the government will pursue new legislation and/or amendments to existing legislation, including the Police Act that will provide for the modernisation and transformation of the Jamaica Constabulary Force (JCF).

He added that the legislation is now ready for approval by Cabinet and will be tabled this year.

The Governor General said the government also intends to merge the Police Services Commission and the Police Civilian Oversight Authority to facilitate the development of one oversight body, responsible for the monitoring and evaluation of the performance of the police.

It will also amend the Criminal Justice (Suppression of Criminal Organizations) Act, which is currently before a Joint Select Committee of Parliament, as well as the Firearms Act, in keeping with international standards and obligations of the Government of Jamaica.

The government said the amendments to the Proceeds of Crime Act (POCA) will ensure compliance with the recommendations of the Caribbean Financial Action Taskforce (CFATF) Mutual Evaluation of Jamaica, conducted in 2016; as well as to update the Act for greater effectiveness.

The Governor General said that the government has indicated that it will be pursuing new security measures, arising from the ending of the States of Public Emergency in St. James, the St. Catherine North Police Division and sections of the Corporate Area.