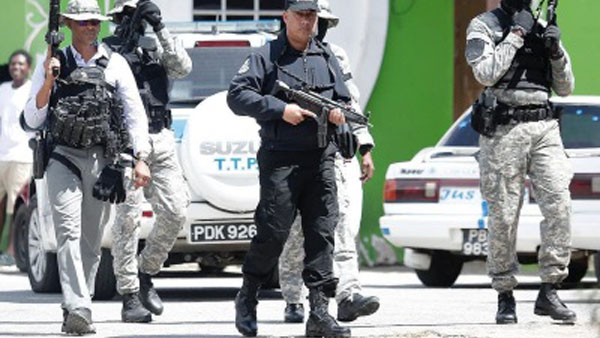 Trinidad and Tobago Police Commissioner, Gary Griffith (center), pictured leading a police exercise, on the outskirts of the capital, yesterday. Photo courtesy of the TTPS.

PORT OF SPAIN, Trinidad and Tobago, February 14, 2019 (CMC) – The Trinidad and Tobago Police Service (TTPS) vowed, today, to deal with the “punks, thieves, parasites and cockroaches”, as it raised, with “immediate effect”, the policing alert, from “Amber to Red”, as a result of the ongoing gang activities and murders, here.

“What we are doing, is steeping up what is required, to ensure that you are safe and secure. So there is a concept of operation that is nationwide,” Police Commissioner, Gary Griffith, told a news conference, adding that the police believe “there may be a perceived threat”, based on “one or two specific individuals”.

“I refer to them as punks, thieves, parasites, cockroaches, who have continued to destabilise our country and to prevent our citizens from having a safe and secure society.

“We will continue, at this level, until we peg them back. Let them know exactly, that no gang, in any part of this country — no turf, no street, no community — belongs to them (and) that gives them the authority that they could put hits on persons, or believe that they have the authority to put the law into their own hands,” the Police Commissioner said.

Griffith added that the alert state would remain, “as is, (and) we will continue to peg back these criminal elements”.

Yesterday, National Security Minister, Stuart Young, announced plans for a major security operation, here, and warned nationals to be prepared for some level of inconvenience, as the law enforcement authorities move to tackle various crimes, including murder in Trinidad and Tobago.

“I am not going to divulge the particulars at this time. Those are operational matters, I am sure at the appropriate time, the Commissioner of Police and others will address it,” he told a news conference, adding that it was no longer acceptable for the law enforcement agencies to be reacting to what’s taking place in the country.

Last year 516 people were killed and, so far this year, at least 70 persons have been murdered.

Griffith told reporters that he led a police exercise on the outskirts of the capital, yesterday, where several persons had been detained; and he warned persons, throughout the country, that the police would not tolerate any form of disobedience, when arrests of gang and so-called community leaders, are made.

“I wish to advise the public, and to let the media be aware, that if any of them put God past their thoughts this time around, I am waiting on them.

“No area could feel that they so big and bad that if we arrest any gang leader, you feel that you have the authority…I will be walking in with several paddy wagons and anyone who breaks the law, if they are in love with their gang leaders, they will accompany them, they will join them.

“Everything we are doing is intelligence-driven and the operations will be based on that. It is not a case of us, just deliberately trying to intimidate or harass anyone. What we would be doing is to peg back criminal elements and to look at those specific areas, where individuals continue to utilise their resources, their troops and feel they can actually work above the law,” he announced.

He said “if and when” the police believe that the operations have been successful, the country would revert to “Amber”.

But Griffith, a former national security minister, here, said that he was also sending a warning to the relatives of those persons, engaged in gang violence.

“This is a one-way ticket to hell. It is either they are going to be arrested or end up dead, sooner or later,” he said, adding “I will ask all persons, who really care about your loved ones, you cannot just be turning a blind eye because of financial gain”.

“You are going to lose your loved one, sooner or later. Money cannot be the value of your loved one. And I speak to this, to all of the individuals who are fully aware of their sons turning to a life of crime and becoming influenced, because they are naïve enough to be operating on behalf of the gang leaders.

“These gang leaders stay in their lofty towers. They stay untouchable and they give directives to these other young persons to lose their lives, and they benefit. I ask these young persons (to) stop being used and manipulated by these pests in our society,” Griffith said.

Griffith told the news conference that the police were also concerned that many people, who had been arrested on gun-related charges, were finding themselves out on the streets, very soon afterwards, on bail.

He said while he had no intention of directing or demanding the authorities to deal with the situation, “I can only recommend”.

“At the Trinidad and Tobago Police Service, we have to adhere to the law. If the law gives the authority that persons who have firearms, a firearm, that could ….have 35 rounds that could be sprayed in a few seconds, where dozens of persons could be killed…and after being arrested by the police….you see it fit that you could give, send this person out on bail, then those persons, I would ask them to look in the mirror.