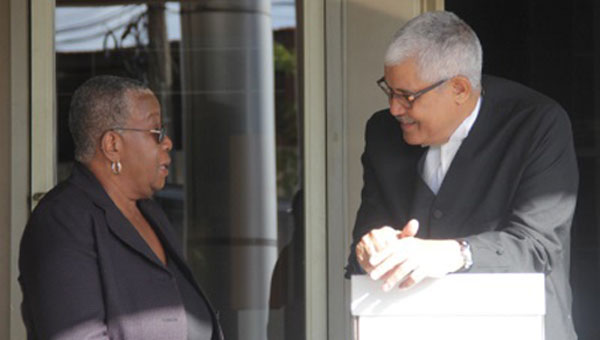 Former Supervisor Of Election Testifies In Polls Petition Case In St. Vincent And The Grenadines

Findlay-Scrubb, who is due to continue her testimony, today, in the election petitions, brought by two defeated members of the main opposition New Democratic Party (NDP) in the 2015 general elections, said she also saw her role as ensuring that every political party had a fair chance in the conduct of the elections.

Findlay-Scrubb, who was supervisor of elections at the time of the 2015 general elections, told the High Court, yesterday, that she expected everything to be done, in accordance with the rules and the law, while she was the election chief.

She told the Court that it was clear that the election law intended for wooden boxes and not the plastic ones, used in the 2015 general elections.

Under cross examination by Queen’s Counsel, Stanley “Stalky” John, the former supervisor of elections said that the plastic boxes, rather than the wooden ones, were also used in the 2009 referendum and the 2010 general elections.

Findlay-Scrubb, who retired in April,  last year, said that she was familiar with the election law, having been briefed by the Attorney General’s Office, after being appointed to the post.

She said when the Representation of the People Act (RPA) speaks about sealing ballot boxes, “it was clearly that it was the wooden boxes, used up until the elections of 2005”.

Findlay-Scrubb said that by the time she had conducted the referendum of 2009, a new plastic box, “used internationally”, was introduced into the local system and that the decision to acquire plastic ballot boxes was made before she became supervisor of elections.

“And so it was not possible to seal the plastic boxes in the same way that the wooden boxes were sealed. Therefore, that’s where the plastic ties come in. They, fundamentally, replaced the key that would have been used to lock the wooden boxes,” she told the High Court.

Asked by John whether there was supposed to be a key to lock the wooden boxes, Findlay-Scrubb told the court that while she was not always the supervisor of elections, she understood that, to have always been the case.

She said that with the introduction of the plastic boxes, there was, therefore, no clear direction of what was now considered a seal “or those technical terms”.

“… we still realised there had to be a way of identifying the box and the person who witnessed that box being packed, closed, they had to still, like with the former seal for the wooden boxes, sign the seal. We created one, but it was not a paper one, it was from a material that could stick on to plastic”.

Findlay-Scrubb said this is what she referred to, in her witness statement, which was tendered as her evidence in chief, as a “sticker” or a “label”, adding that it “had the exact design of the former seal”.

John then asked Findlay-Scrubb if there was a provision in the law for a sticker or a label, and she replied “no”.

But John said that the election rule states that the presiding officer shall “transfer to the returning officer, the ballot box, the envelope continuing the keys thereof …” and asked the former supervisor of elections if she received any keys from any presiding officer in Central leeward.

Findlay-Scrubb said she did not give keys to, or receive keys from, the presiding officer, with the attorney then asking if there was anywhere in the law that provides for her to provide stickers and plastic ties to the returning office.

Findlay-Scrubb said she “would say no”. She added that she is, however, required to ensure the security of the ballot boxes.

“And I do understand Mr. John’s concern about the key or lack thereof. However, as the Supervisor of Elections, I had to make a decision, as to how I can best secure the ballot boxes, in the absence of the specifics, as obtained for the wooden boxes.”

Earlier, Findlay-Scrubb, a former educator, told the court that in St. Vincent and the Grenadines, being the election chief is not a profession, and Supervisors of Elections, here, have been retired public servants, mainly educators.

She acknowledged that while being a teacher and a Supervisor of Elections are “clearly” different jobs, that that was not to say that she was “ignorant of what was required”.

She said that she had worked in the elections of 1979, 1983 and 1984 in the Central Leeward constituency, as a presiding officer, but did not work in any election after 1984, before becoming Supervisor of Elections.

The former election chief said that after being appointed Supervisor of Elections, she had to make herself familiar with the laws that govern elections in SVG, and did so under the guidance of the Ministry of Legal Affairs, specifically the Attorney General’s Chambers. She said she also spent time with a predecessor, who briefed her, in terms of what her role was.

“I had an understanding of what the expectations were,” she said, adding that she also had the benefit of her immediate predecessor.