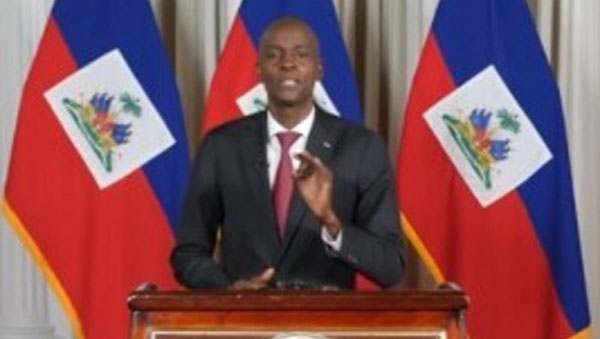 Haiti President, Jovenel Moise, addressing the nation, last night, asked “all the forces of the nation" to join him … "to make changes for the benefit of the Haitian people, in a real dialogue”. Photo credit: CMC.

PORT AU PRINCE, Haiti, February 15, 2019 (CMC) – President, Jovenel Moise, says he will not step down from office, and has promised Haitians that he has no intention of putting the country in the hands of armed gangs and drug traffickers.

In a broadcast on the National Television of Haiti (TNH), last night, Moise, who is under pressure from opposition parties to step down, acknowledged that “the crisis we are going through, is very serious”.

“It threatens the foundation of the country; it has a lot of consequences for the country. There are people who do not make democracy… who want to impose on the nation, something that is not good for them. It is clear to all, that it is only the dialogue with all the forces of the nation that will help us get out of this situation,” he added.

Opposition political parties have been staging street demonstrations in support of their calls for President Moise to step down, after accusing him of not investigating allegations of corruption in the previous government, over PetroCaribe, an oil alliance of many Caribbean states, with Venezuela, to purchase oil on conditions of preferential payment. At least seven people have been killed in the protests so far, and several others have been injured, in clashes with police.

Earlier this month, the President of the Superior Court of Accounts and Administrative Disputes (CSC/CA), Pierre Volmar Demesyeux, presented a copy of the report on the management of projects, financed by the PetroCaribe funds, to the Speaker of the Senate, Carl Murat Cantave.

Cantave has since presented the report to Senator Youri Latortue, the President of the Ethics and Anti-Corruption Commission.

The Catholic Bishops of the Episcopal Conference Haiti (CEH), earlier this week, urged Haitians to come together and deal with the political situation, confronting the French-speaking Caribbean Community (CARICOM) country, and several Western countries have condemned the “unacceptable acts of violence” in the country.

CARICOM has also expressed concern at the violence and called for dialogue among all stakeholders. Several foreign embassies have closed and non-essential staff members have been sent out of the country. The United States has told its citizens “do not travel to Haiti”.

In his broadcast, Moise, who was sworn in as Head of State on February 7, 2017, said he has “heard the voice of the people, I know the problems like you” adding “that’s why there will be a set of measures that the government will take”.

Moise said that while demonstrations are a right, “it is unacceptable for people, who have official functions, to demonstrate alongside armed gang leaders, wanted by the authorities” — an apparent reference to photos, circulating here, showing the gang leader, Arnel Joseph, accompanied by his heavily armed supporters, participating in the opposition demonstrations.

He dismissed suggestions by the opposition that the photo was being circulated by the authorities in a bid to discredit the opposition.

Moise said that he would continue to ask the Superior Council of the National Police (CSPN) to make arrangements, so as to ensure the safety of members of the population, who are engaged in peaceful demonstrations.

In his broadcast, the President said that he has no intention of stepping down before the end of his mandate, and that “I will not let go of the country, in the hands of armed gangs and drug traffickers”.

“I ask the CSPN to continue to make arrangements to stop all the drug dealers, the people who burn the police, who mourn and terrorize the population.”

“The country is suffering too much. I open my arms to all those who agree with me, come to sit and talk, seek a broad consensus to find a political agreement that resolves the problems that upset the country.

“I ask all the forces of the nation to join me … to make changes for the benefit of the Haitian people, in a real dialogue,” he said.

But as Moise’s address ended, sporadic automatic gunfire resounded in the capital and new burning barricades were erected.