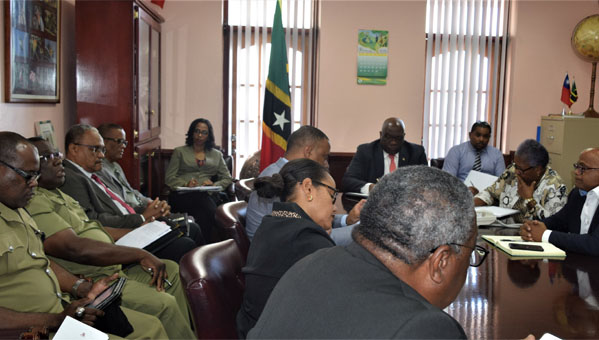 St. Kitts-Nevis Prime Minister, Dr. Timothy Harris (at head of table) and hisl Cabinet met with the High Command of the principal agencies responsible for national security and border safety on Tuesday, February 12 and again yesterday.

BASSETERRE, St. Kitts-Nevis, February 15, 2019 (CMC) – The St. Kitts-Nevis government, today, warned that “nothing is off the table”, as it announced new initiatives to deal with the “unprecedented spate of violent crime” in the twin-island nation, over the past week, resulting in the deaths of six people.

A government statement confirmed that the Cabinet met, yesterday, with high-level representatives of the key agencies responsible for national security and border safety, to discuss the situation.

The statement said that the meeting, which Harris chaired, agreed “that the unprecedented spate of violent crime …demands an unprecedented response, involving the participation and support of the general public and the entire body politic”.

It said that the Cabinet had also expressed “condolences to all families, who have lost loved ones, as a result of violence”.

“The Federal Cabinet wishes to inform citizens and residents that it is considering all necessary steps and measures, to protect public safety and bring those responsible for criminal activities to justice.  If there was ever a time for a new approach to policing and securing our communities, it is now. As a result, nothing is off the table,” the statement added.

The statement said that the government is committed to adding “more teeth to the current anti-gang legislation, in quick time, with the aim of effectively discouraging gang membership and deterring and punishing crime.

“The security forces have been mandated to apply maximum pressure on known criminal elements. It is anticipated that doing so might cause some inconvenience to the general public, the overwhelming majority of whom are law-abiding citizens. The Cabinet deeply regrets any such inconvenience to law-abiding citizens and seeks the support of the various communities to rid them of all criminal elements.”

The statement said that the security forces have proposed and will immediately engage in a wide-ranging response, “including, but not limited to, increased presence of security personnel in various communities, enhanced stop and searches, targeted raids, cordon and search operations, and deployment of technological assets, in order to curtail gang activity”.

The statement elaborated that Cabinet will be convening meetings and consultations, very shortly, with a wide representation of stakeholders and reiterated that the government is committed “to working with law enforcement, parents, teachers, church and civic leaders, the Opposition and with each and every one of you, to control this situation”.

“We cannot respond with business as usual.  The time for firm, decisive and unified action is now.  Our beloved Federation demands and deserves nothing less. We intend to confront this criminality, resolutely, and shall apply concerted and constant pressure until crime and criminality within our society, is brought to heel,” the statement explained.

Prime Minister, Dr. Timothy Harris, is due to address the nation later on today.