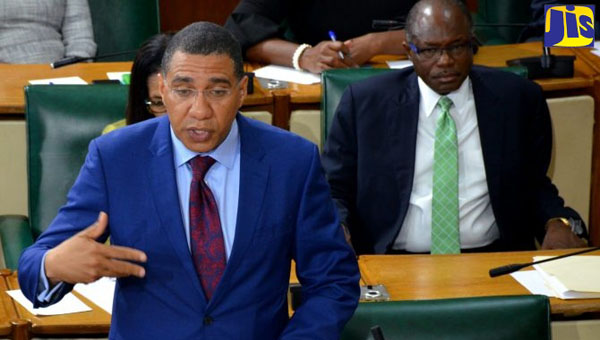 Prime Minister, Andrew Holness, addresses the House of Representatives, yesterday. At right is Minister of State in the Office of the Prime Minister with responsibility for Works, Everald Warmington. Photo credit: Mark Bell/JIS.

KINGSTON, Jamaica, February 21, 2019 (CMC) – The Jamaica parliament has given the Andrew Holness government the green light, to compulsory retake the 49 percent shares in the state-owned oil company, Petrojam, that had been held by the Venezuelan state-owned oil and natural gas company, Petróleos de Venezuela (PDV) Caribe.

The Prime Minister, who tabled the Compulsory Acquisition (Shares in Petrojam Limited) Act, 2019, said the decision to move, in the current direction, was not taken lightly.

He said Petrojam and Jamaica have been left at risk, due to years of inaction.

“Technical assessments have found that refining operations will be negatively impacted by 2020, if Petrojam is not in a position to execute Phase 1 of the refinery upgrade (Vacuum Distillation Unit Project),” Holness told legislators.

“This is primarily due to the imminent international obligations, as stipulated by the International Maritime Organization regulations, regarding sulphur, which will become effective on January 1, 2020, and the transition, by the Jamaica Public Service Company Limited (JPS), to liquefied natural gas for its 190 MW power plant, by June 2019, thereby reducing the need for heavy fuel oil, produced by Petrojam,” he added.

Opposition Leader, Dr. Peter Phillips, said the legislation is unprecedented and inappropriate. He said that the move, to forcibly acquire the shares, is politically motivated.

“If we yield to the mighty power, always, we soon will not have the flexibility to operate by ourselves…” Phillips said.

PDV Caribe, an affiliate of the state-owned Petroleos de Venezuela S.A., and the Petroleum Corporation of Jamaica (PCJ), entered into a joint venture agreement, which resulted in the sale of PetroJam shares in August 2006 and February 2007.

The agreement had called for the upgrading and expansion of the refinery, to improve its competitiveness and meet local and international market demands, but Foreign Affairs and Foreign Trade Minister, Kamina Johnson Smith, said, last month, that these objectives were not met and that this poses a risk to the economy.

In his statement, Prime Minister Holness said that the United States Executive Order 13808, dated August 24, 2017,  essentially prohibits United States persons from entering into specified transactions with the government of Venezuela, and any political division, agency or instrumentality thereof, including PDVSA.

“While Petrojam itself was not identified as a ‘sanctioned entity’ under the Executive Order, the fact is that its banks and correspondent banks, which facilitate basic transactions with suppliers and service providers, are considered US persons, and were, therefore, at risk, or at perceived risk, of high fines for breaching such sanctions, and accordingly, they were hesitant to continue providing such services, which were fundamental to the most basic operations of Petrojam,” he said.

Holness said that his government had no choice, but to take action, in the interest of preserving the energy security of Jamaica.

“It is important to understand that the government of Jamaica does not see this as a political issue… . I want to make it absolutely clear that the decision to acquire the shares is an economic decision.”

Prime Minister Holness said that the payments, to and from Petrojam, have been subjected to increased due-diligence by the primary suppliers of lines of credit, as well as intermediary banks, and the disruption or delay of transactions for Petrojam Limited has become a source of unease for Petrojam’s suppliers.

“An even more serious concern is the overseas suppliers of goods and services to Petrojam. Owing to Petrojam’s continued association with Venezuelan entities, some suppliers have advised Petrojam that they are no longer willing to take the risk of supplying to Petrojam, and others have expressed grave concerns,”  Holness noted.

The need for an upgrade of the refinery was recognised, from as early as the 1990s, and Petrojam and the PCJ have undertaken several studies on the refinery upgrade.

“The challenge has always been the cost of the upgrade, which can run into hundreds of millions of dollars, with estimates, as much as, more than a billion dollars, depending on the extent of the upgrade,” Holness revealed.

In February 2005, a Letter of Intent was agreed between the Bolivarian Republic of Venezuela, acting through its Ministry of Energy and Petroleum, and the government of Jamaica, acting through the Ministry of Commerce, Science and Technology, confirming, in principle, that they would pursue feasible options for the improvement of the refinery.

Additionally, in June 2005, further to the Letter of Intent, a Memorandum of Understanding was signed, between the same parties, with a view to establishing a joint venture.

On August 14, 2006, a Joint Venture Agreement (JVA) was signed, between the PCJ, Petrojam and PDV Caribe SA (PDV Caribe) to cooperate in the ownership and management of Petrojam and to undertake the refinery upgrade, which was recognised as critically important for the energy security of Jamaica.

“It stated that PDV Caribe SA and the PCJ agreed to embark on a Refinery Upgrade Project (RUP) through the medium of Petrojam. The JVA defines the RUP as a project that will be carried out to expand the Kingston Refinery Processing capacity, from 36 kilo barrels per day to 50 kilo barrels per day,”  Holness said.

The first phase of the RUP will include a revamp of the Atmospheric Distillation Unit, and the installation of new units, including a Vacuum Distillation Unit, Naphtha Reformer. Phase Two will be evaluated, aiming at incorporating a Deep Conversion Unit in the Refinery.