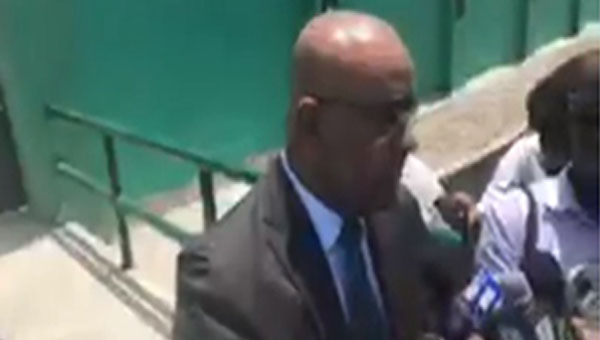 GEORGETOWN, Guyana, March 6, 2019 (CMC) – Opposition Leader, Bharrat Jagdeo, today, insisted that President David Granger must indicate the date for a fresh regional and general election, hinting that the talks between the two leaders were not all that successful.

“We did not get past the first issue,” he told reporters, when asked whether or not he would characterise the discussions as having broken down.

“It’s a sunny day outside of the Office of the President. That’s my thoughts,” he told reporters, when asked to be more specific as to whether the talks had indeed broken down.

Earlier, President Granger, in a statement, had described the more-than-one-hour-long talks as “useful and fruitful”, and sought to assure Guyanese that efforts are being made to ensure credible regional and general elections are held in the country, “in the shortest time possible.

“Both sides are working towards the solution of the issues, which now confront us and I think we had a very positive approach,” Granger said, insisting that “there is no crisis” and acknowledging that “there are issues which have to be resolved, and most of those issues will depend on what I hear from GECOM (Guyana Elections Commission) when I consult them”.

But Jagdeo, speaking to reporters after the talks said “the time is ticking, the ball is in his (Granger) court.

“He is the one, who is leading this country into a constitutional crisis. I made it clear, I came here to engage, today, on one issue and that’s why, when he wanted to discuss other matters, I said no. I have to have one issue clear, when is the date for election (and) we did not get pass that issue,” he said.

The former president said during the discussions, he made it clear that three of the GECOM commissioners were taking instructions from the headquarters of the People’s National Congress (PNC), which is the main partner in the outgoing coalition government, here.

“I said to him, you have a duty as President, but also as leader of the party…that your party has been threatening war, they have been picketing, they are putting pressure on GECOM, and the three commissioners that are political commissioners, representing the government, have been the ones delaying the elections,” he revealed.

Jagdeo has been calling for fresh regional and general elections to be held by March 19 in keeping with the provisions of the Guyana Constitution following the successful tabling of the motion of no confidence against the Granger-led coalition administration on December 21, last year.

Jagdeo also told reporters that the call for a house-to-house update of the electoral list is nothing short of an attempt, by the government, “to delay the elections”.

He said GECOM has until April 30 to hold the elections, saying “I am sticking with that”, and that the agency could put in place, within 50 days, all the necessary machinery to hold the polls.

“There are a lot of things that could be done. This is not rocket science. What is happening over there (is), they are working…to delay the elections.

“This government doesn’t want to go to elections. They have seen the writing on the wall. They have done their polls, they are losing badly. They are hoping with this delay, they can spend more money….and go back on the ground and make a new set of promises and it will change their electoral fortunes. It will not,” Jagdeo told reporters.