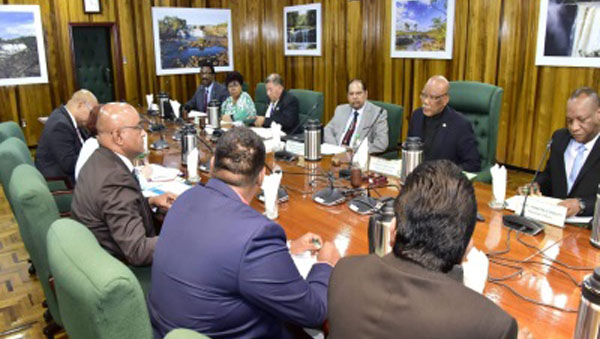 Jagdeo had listed a number of proposals he wanted President Granger to agree to, before committing himself to the talks, and decided to meet, after, on behalf of the President, Minister of State, Joseph Harmon, issued a response.

In a written reply, dated March 5, to the opposition leader’s letter, dated March 4, Harmon wrote that the contents of Jagdeo’s letter “was conveyed to His Excellency the President, who advises that he is prepared to meet with you, on Wednesday, March 6 at 11.00 hours, at the Ministry of the Presidency and to discuss the issues raised in your aforementioned letters”.

In his response to Harmon’s March 5 letter, Jagdeo wrote, “Many people believe that nothing positive will come out of the meeting tomorrow, given the track-record of duplicity of the Granger administration thus far. The Opposition Leader shares some of these misgivings.

“Nevertheless, having been approached by many Guyanese, civil society bodies and members of the diplomatic corps to make one last attempt to avert the constitutional crisis that the President, with a complicit GECOM, is leading our nation into, the Leader of the Opposition is prepared to make one more good-faith attempt in the interest of the nation, and, will attend the meeting.

“This is the last attempt by the Parliamentary Opposition to offer the government a way out of the constitutional crisis and to keep Guyana in the democratic fold of nations.

“If the meeting fails, the true nature of the government will be seen by all those who urged the Opposition Leader to meet.

“Tomorrow will be a test of the integrity, credibility and sincerity of the President; he will be tested as to whether he can be trusted “as a man of his word” to put our nation, its future and its people first on a foundation of constitutional and parliamentary democracy. This will be a test as to whether the constitution or ‘power lust’ wins out.”

A government statement issued here, today, said that the discussions “are expected to last for approximately one hour”.

“This second meeting follows President Granger’s invitation to the opposition leader to meet and discuss the National Assembly’s constitutional role in the present situation and GECOM’s (Guyana Election Commission) readiness and requirement for funding to enable it to conduct General and Regional Elections,” the statement added.

It said that the meeting Wednesday “follows a previous meeting held on January 9”.