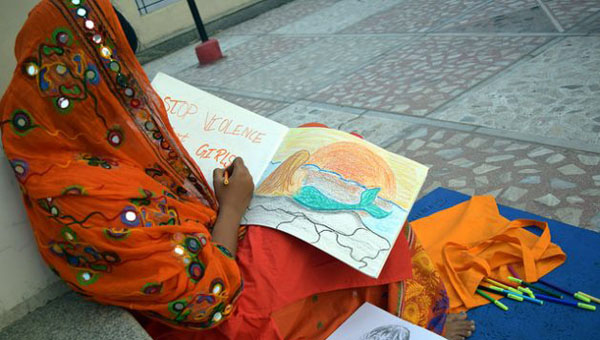 In India, less than 10 percent of women and girls have access to sanitary products. Many are forced to seek alternatives, from old rags to newspapers. Photo credit: Stella Paul/IPS.

UNITED NATIONS, New York March 8, 2019 (IPS) — It is time to rise up and fight a long-neglected taboo: menstruation.

“Persistent harmful socio-cultural norms, stigma, misconceptions and taboos around menstruation, continue to lead to exclusion and discrimination of women and girls,” the experts — from various mandates, from cultural rights to violence against women — said in a joint statement.

Among the experts is the Chair of the Working Group on discrimination against women in law and in practice, Ivana Radačić, who told IPS of the need to challenge the taboo.

“Even in the human rights community, it is either thought of as, not so important or people did not understand how much discrimination exists still,” she said.

“We really feel that it is time to challenge the taboos and shame and to address the human rights issues that arise, in respect to discrimination and stigma,” Radačić added.

Period-Shaming
Around the world, millions of women still lack access to basic sanitary products, to manage menstrual bleeding. In India, less than 10 percent of women have access to sanitary products. Many are forced to seek alternatives, from old rags to newspapers. The use of unsanitary materials often have health implications, including reproductive tract infections and cervical cancer. The lack of adequate gender-sensitive facilities is another challenge, preventing women and girls from maintaining menstrual hygiene in a private, safe, and dignified manner.

According to the World Bank, at least 500 million women and girls lack such facilities, which severely impact girls’ attendance and participation in school. In Nepal, 30 percent of girls report missing school, during their periods. This all stems from the idea that menstruation is “impure” and even often treated as an illness, resulting in the exclusion of women and girls in societies around the world.

“When combined with the stigma and shame that women and girls are made to feel during that time, it is truly disempowering,” the joint statement said.

When on their periods, many women and girls are not allowed to touch water or food and are restricted from entering religious or culture sites. Chhaupadi, a practice still common in Nepal, restrict women and girls from entering their homes, touching their parents, or going to school or temple. Instead, they are banished to a hut, outside the main house, for the duration of their period. The U.N. has found reports of pneumonia, attacks from wild animals, and rape, when women and girls are banished to a shed.

However, if a woman doesn’t follow the rules, she is told that she will bring destruction and misfortune to her family. Though the Indian Supreme Court lifted the ban on women and girls, of menstruating age, from entering Sabarimala temple in Kerala, the move has sparked protests and violence by opponents, many of whom blocked women from entering the temple.

“This idea of women being contaminated and impure — that then has an effect on how they feel and see themselves, and how they see their own womanhood,” Radačić said.

Changing the Cycle
Many have already been working to shine a spotlight on the issue, including Plan International UK, which has launched a period emoji, represented by a red droplet, as a way to overcome the silence around the natural, monthly reality for billions of women, worldwide.

A new documentary, ‘Period. End of Sentence’, which revealed the stigma of menstruation in rural communities in India, even won an Oscar.

Radačić noted that the documentary was “timely” and a good way to raise awareness to people in Western countries, who may be unaware of the inaccessibility of hygienic and sanitary pads for many girls and women.

The documentary, directed by Rayka Zehtabchi, follows the installation and impacts of a low-cost sanitary napkin machine, made by notorious “Pad Man”, Arunachalam Muruganantham.

Inspired after seeing his wife use a rag for her menstrual bleedings, Muruganantham now provides pad machines to communities across the South Asian nation, and trains women on how to use them, allowing them to establish their own business and sell affordable pads.

“The strong creation created by god in the world is not the lion, not the elephant, not the tiger — the girl,” Muruganantham said.

In the documentary, a group of women branded their sanitary products “Fly,” and with good reason.

“We have installed this machine for women. So now we want women to rise and fly,” one woman said.

Radačić also pointed to situations of conflict and crises, leaving many displaced and refugee women without access to sanitary products or even basic, private facilities.

Organisations, such as WoMena and CARE, have started to address this gap, implementing a pilot project in the Rhino refugee camp, in Northern Uganda, which provided menstrual cups and reusable pads.

One girl, who received a menstrual cup, which are reusable for up to 10 years, told CARE that she now feels more comfortable and has confidence, as she plays sports and attends class, during her period.

In fact, a study from University of London’s School of Oriental and African Studies (SOAS) found that providing free sanitary products and lessons about poverty, increased girls’ attendance at school, by 17 percent.

“There is more and more grassroots actions in certain communities, and there is a celebration of the menstrual cycle, of the cyclical nature of a woman. I think it is a great time to really push this issue forward,” Radačić told IPS.

However, it is not enough to just provide sanitary pads, she noted.

Radačić highlighted the need for countries to abolish laws, where women are excluded or restricted on the basis of menstruation, to ensure access to hygienic products and gender-sensitive facilities, and teach comprehensive sexuality education to help break the taboo around periods.

“Much more has to be done to address the menstrual health needs of women and girls, and to acknowledge that the failure to address them has a detrimental impact on all areas of women’s lives,” Radačić and others said.