New in Pride
Home / National News / Could The Mushrooming SNC-Lavalin Embroglio Hurt The Trudeau Government’s Chances Of Success In The Fall Election? 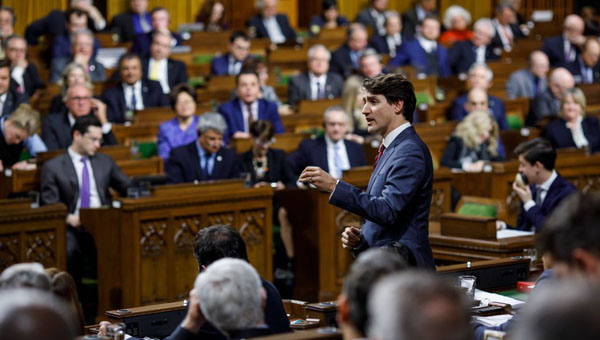 Could The Mushrooming SNC-Lavalin Embroglio Hurt The Trudeau Government’s Chances Of Success In The Fall Election?

In 2015, when Justin Trudeau swept into power, not only did he revive the Liberal Party, but also became an instant global superstar. Yes, he was not just simply Canada’s new Prime Minister, but young, tall and athletic, or so gushed the influential New York Times.

The progeny of a Canadian political giant, he toppled the Stephen Harper-led Conservatives by following his father’s playbook. He ran as the youthful candidate, full of charisma, vigour, good looks and loads of new ideas.

His was an exciting new face, standing out in the dignified world of Canadian politics. Appealing to the 20-something-year-olds crowd, flexing their political muscles for the first time, he was the prime leader for the social-media generation, replacing a buttoned–down Harper, whose government had simply run its course.

On the policy front, Justin Trudeau could do no wrong either. From the get-go, he fulfilled certain election promises. Appealing to the progressive base, which the Liberals had adroitly snatched from the NDP, he apologized for residential schools, taxed the rich, cut taxes for the middle class, passed a gender-friendly budget, imposed a carbon tax and legalized medically-assisted dying.

But such is the volatile nature of being a leader, regardless of how bright the forecast looks in your first year of power, “sunny days” will unavoidably give way to “stormy days”.

The Canadian populace had to digest reports of cash-for-access dinners with Chinese billionaires; the burning revelation of an all-expenses-paid family vacation to the Aga Khan’s island that consequently drew rebuke from the Federal Ethics Commissioner for violation of the Conflict of Interest Act; and the public relations catastrophe, surrounding his visit to India with his outrageous wardrobe selections and a dinner invitation to a convicted ex-terrorist.

Eyeballs were set rolling and tongues wagging with the Prime Minister’s snide “people kind” comment; the dodging of the #Me Too Movement; and consternation at how he ended up buying a disputatious and absurdly-expensive pipeline that no one was interested in, or wanted, least of all the environmental and First Nation’s voters that he had so aggressively pursued.

Trudeau won rave reviews for his treatment of Donald Trump at the G7 summit in Quebec, won respect and had his rating bumped up.

Now the honeymoon is seemingly over and Trudeau finds himself embroiled in a “war-mance” of sorts. Allegations that he put pressure on Jody-Wilson-Raybould, the only Indigenous politician in the Cabinet and the then-Justice Minister and Attorney General, to drop a criminal case against a large construction company. According to Mme. Wilson- Raybould, the PM and his officials commandeered her to suspend the prosecution of SNC-Lavalin for bribing Libyan officials, prior to 2011, and instead fine the company.

While the Prime Minister admits that he did discuss the matter with Ms. Wilson-Raybould, it was solely because he wanted to protect 9,000 jobs, and further, denies that neither he nor his officials did anything inappropriate. He did not override her decision to proceed with a trial.

One of the reasons why the Prime Minister finds himself in hot water, or at odds with the nation, is that in the 2015 elections, he called himself a feminist and promised to ameliorate Canada’s turbulent relations with Indigenous peoples, and pledged to conduct an open and transparent government.

Such promises appear vacuous after the Indigenous politician, told the parliamentary justice committee investigating the affair, that the PM and his officials had tried to intimidate her. In testimony Ms. Wilson-Raybould said that the most senior bureaucrat in Ottawa issued “veiled threats” of what would happen, if she did not change her mind, and further opines that she was demoted, in January, to the more junior post of Minister of Veterans’ Affairs, primarily as a punishment for resisting. She resigned from the cabinet, but still sits as a Liberal MP.

Trudeau faced severe criticism, after officials from within his party began anonymously telling media that Wilson-Raybould was difficult to work with and was only in politics for herself, which quickly prompted accusations of sexism and racism. This level of criticism, along with her resignation, have all served to indubitably erode the critical goodwill with Indigenous leaders that the PM and his team have worked so hard to build, additionally casting doubt over his feminist bona fides.

The resignation of the former Indigenous Justice Minister was followed by similar action by Trudeau’s former Chief Secretary, Gerald Butts, and former President of the Treasury Board, Dr. Jane Philpott.

In her resignation letter the Treasury Board President claimed that she has lost confidence in the ability of Justin Trudeau to handle the SNC-Lavalin affair, and as a consequence, her ethics demand that she takes a stand.

In her letter to Trudeau, she said it was “untenable” for her to remain in cabinet, given “evidence” that officials attempted to pressure the former attorney general. “There can be a cost to acting on one’s principles, but there is a bigger cost to abandoning them,” she wrote.

Following Philpott’s departure, Finance Minister, Bill Morneau, insinuated that her close friendship with Wilson-Raybould was the real reason she left. However, rhetoric, surrounding the exit by the two female former cabinet ministers, has been replete with sexism.

Now another “ism” has been brought into the fray. Two western provincial premiers have called out the Prime Minister, claiming that the current SNC- Lavalin affair is diverting his attention, at a time when he should be focused on jobs in their regions. Premier Scott Moe of Saskatchewan took umbrage at the Prime Minister’s remarks about the 9,000 jobs tied to the Quebec company, and further criticized the PM for implicating David Mc Naughton, Canada’s ambassador to the US, in the SNC-Lavalin issue, when he should be concentrating on eliminating US tariffs on Canadian steel and aluminum.

Rachel Notley, Premier of Alberta, intoned that Alberta’s struggle to get its oil to market has a much greater impact on jobs than SNC-Lavalin. Notley said, early last week, that Trudeau needs to get back to work, defending jobs and farmers, especially since China has started blocking import shipments of Canadian canola.

In a news conference, Prime Minister Trudeau blamed poor communications and an “erosion of trust” between his former top adviser and Jody Wilson-Raybould for the SNC-Lavalin controversy that has rocked his government.

Sadly, such an excuse failed to find favour with Opposition Leader, Andrew Scheer, who called the conference a phony act of fake sincerity, and renewed his call for an RCMP investigation and the Prime Minister’s resignation.

“Justin Trudeau would like Canadians to believe that all of this took place, simply because different people had different experiences of events, but there’s something that Justin Trudeau simply does not understand,” he said. “The truth cannot be experienced differently. There is such a thing as right and wrong, and real leaders know the difference.”

Could this scandal bring the government down or would the PM’s behavior be dismissed as being that of a clown. Is Jody Wilson-Raybould telling the truth, the underlying reason behind her portfolio boot? Do Canadians really care that the Prime Minister tried to politically interfere?

While the scandal will likely not damage him in Quebec, where his support of SNC-Lavalin is viewed positively, it could prove damaging in the rest of the country. And with the nation going to election in the Fall, victory for the Liberals may be a close call.