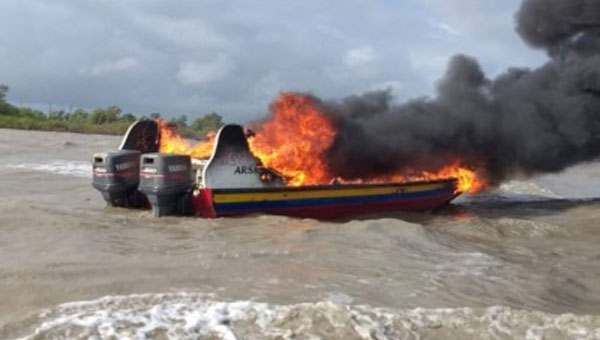 At Least Two Killed In Boat Explosion In Guyana

GEORGETOWN, Guyana, March 12, 2019 (CMC) – At least two people were killed when a Venezuelan passenger boat — heading to Charity on the Pomeroon River, situated between the Orinoco and the Essequibo rivers — with 22 persons on board, caught fire and exploded off the Waini Coast on Sunday.

The boat had departed from Venezuela during the early hours on Sunday, media reports said.

The Mabaruma Regional Hospital reported that 20 people, including an elderly woman, have been accounted for, while the body of one of two persons, who died in the incident, has been recovered.

An elderly, blind man, Carlos Archer, is said to be one of the persons, who is feared dead. His 73-year-old wife, Phyllis Archer, was treated at the hospital. She had sustained burns about her body and, on Sunday evening, was transferred to the Georgetown Public Hospital Corporation (GPHC) for further treatment.

The hospital said that 13 women were treated at the health institution.

Archer told the Guyana Chronicle newspaper that she and her husband, along with a friend, called “Sabrina”, left the Venezuelan town of San Felix on Saturday for a pick-up point close to the border.

She said that three hours after leaving the South American country, there was a loud explosion.

“The sun was hot and all I noticed was a ball of fire,” she told the newspaper, adding that the choppy waters prevented her from grabbing her husband.

“We were going down and I tried to hold onto him,” she said, adding that she saw others trying to swim to shore.

The elderly woman said she had already given up, when she heard shouting and was taken into a rescue boat. She was reportedly rescued by personnel, working for the Protected Areas Commission, who were stationed at Shell Beach. The Guyana Defence Force Coast Guard also raced to the scene.

Almost weekly, the boats make the trip between Guyana and Venezuela. The trips have become more frequent, as the economic woes in the South American country force people to flee.