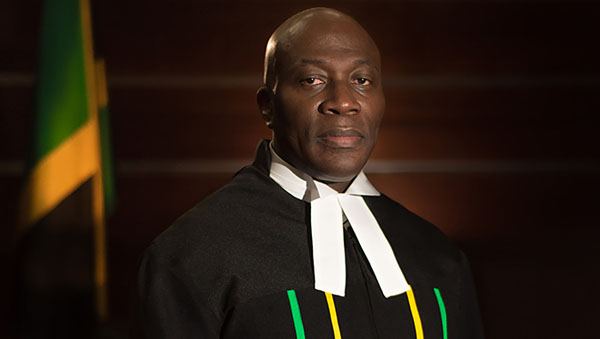 The Chief Justice of Jamaica, Bryan Sykes, revealed that his vision for Jamaica's judiciary is "to be the best in the Caribbean region in three years and among the best in the world in six years, beginning March 1, 2019".

KINGSTON, Jamaica, March 12, 2019 (CMC) – Chief Justice, Bryan Sykes, says unnecessary court delays will not be accommodated, adding that the judiciary  “must get to the point, where matters begin on the day it is listed to begin”, as he moves to implement measures that will make the courts, here, “the best in the world in six years”.

In a radio and television broadcast, on Sunday night, marking the first anniversary of his appointment, Justice Skyes said, he understood the complexity, as well as the magnitude of the work that needed to be done, to transform the judicial arm of government, with excellence and efficiency at its core.

“It was also with the recognition that, if Jamaica is to achieve vision 2030, the Jamaican Judiciary must remain strong and maintain its integrity,” he said, elaborating that in developing excellent courts here, three main pillars are necessary, including trial and hearing date certainty.

“This means that the trial or hearing takes place on the day it is listed to begin. We no longer set multiple trials for each courtroom, as this always lead to adjournments. Unnecessary delays will not be accommodated.

“We must get to the point where matters begin on the day they are scheduled, and move away from the culture of multiple adjournments and mention dates. The culture shift has begun to produce desirable results in the Supreme Court and Parish Courts,” he revealed.

The Chief Justice said that the Court of Appeal should also increase its disposal rate as, since January 2019, there are now three additional judges, with three more to be added, later in this year.

“The consequence of hearing and trial date certainty is that cases are disposed of, within stated time standards. In Jamaica this means disposing of cases, within 24 months of entry into the courts.”

He said that in some divisions of the Supreme Court, the Gun Court and Parish Courts statistics show that more than 100 cases are being disposed of, for every 100 cases filed.

“For the first time, last year, seven Parish Courts had a clearance rate, of over 100 percent. This has set the platform for us to clear the current backlog, within six years,” he said, noting that time, human and material resources are properly utilized to produce the best outcomes for excellent courts.

“It is our goal to decrease the waiting time for the adjudication of some matters. For example, in divorce matters, once the documents are submitted error-free, the decree absolute will be issued, within 16 weeks. By December 31, 2019, there will be no outstanding divorces. That is our commitment to you.”

The Chief Justice said, that in relation to matters of probate and letters of administration, that is, establishing the validity of wills and dealing with the estates of persons who died, without a will, once all documents are submitted error-free, the Supreme Court staff will ensure that these take no longer than 12 weeks.

“Thirdly, excellent courts mean that we have a culture of service among staff and judges. Research has shown that the perception of court users is influenced by how they are treated and not only by the outcome of their cases.”

He said as our customer service charter states, court staff will be courteous, respectful, fair and prompt.

“To support this vision, I give my commitment, to put in place measures, so that by December 31, 2019, all outstanding judgments in the Supreme Court will be delivered. As of 2020, a judgment should be delivered within 90 days, and in exceptional cases, 180 days, following completion of the case.

“Courts will start on time and trial time productively utilized. All stakeholders – judges, court staff, witnesses, jurors, attorneys at law, police officers and others — despite the many challenges they face, must resolve to come to court to assist in the administration of justice,” Justice Skyes said, adding that the judiciary “will ensure that Jamaica is the place of choice to live, work, raise families, do business and retire in peace and safety”.