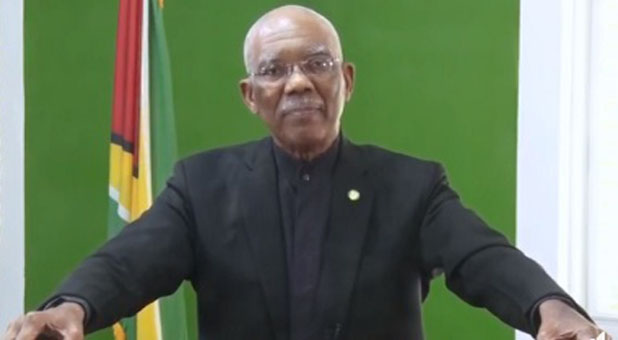 Guyana's President, David Granger, announced, today, replacements for three of the four Cabinet Members, whose resignations were tendered on April 2 and became effective today: Minister of Business, Dominic Gaskin; Minister of State, Joseph Harmon; and Minister of Public Service in the Ministry of the Presidency, Dr. Rupert Roopnaraine. No replacement was named for Foreign Affairs Minister, Carl Greenidge, in the President's statement today. Photo credit: DPI.

GEORGETOWN, Guyana, March 15, 2019 (CMC) – President, David Granger, insisted, today, that his coalition government was not unconstitutional, saying there is no legal impediment that restrains it from exercising its functions or requires it to assume only “caretaker” functions.

In a nationwide radio and television broadcast, Granger said that notwithstanding the passage of the motion of no confidence in the National Assembly on December 21, last year, the current political situation “should not be a cause for alarm and anxiety”.

“The Constitution of the Cooperative Republic of Guyana is sacrosanct and supreme, the independence of the Judiciary and the Elections Commission is respected and the National Assembly is functional,” he said, adding that he is confident that, if these institutions are allowed to function without interference, the nation could expect a good outcome to the present situation.

“I wish to assure everyone, that the government will continue to respect the Constitution, abide by the law and ensure the orderly functioning of the agencies of public administration and the efficient conduct of credible elections,” he said.

The main opposition People’s Progressive Party-Civic (PPP-C) has been calling for fresh regional and general elections, in keeping with the Constitution that allowed for 90 days for the polls to be held, following the passage of the motion of no confidence.

The Constitution also allows for an extension of the time, but it must be approved by a special majority in the 65-member National Assembly.

Opposition and PPP-C Leader, Bharrat Jagdeo, whose motion has triggered the political stalemate here, said his party has no intention of providing the necessary support to extend the deadline, even though the Guyana Elections Commission (GECOM) said that it is unable to conduct credible elections within the existing time frame. GECOM has suggested a date in July.

In his address, Granger said that the no-confidence vote activated four concurrent processes, all of which have a bearing on the present political situation.

He said that the authority of the legislative branch is unimpaired and that the National Assembly remains in session.

“This is essential because, under the Constitution [at Article 106 (7)], the Assembly could be summoned to expand the time for conducting general and regional elections, beyond the period of 90 days from the time of the no-confidence vote on 21st December 2018.”

He said the High Court, in its ruling in January, had declared that the Parliament is not dissolved, as a result of the no-confidence motion. Instead, it is the holding of elections, which will be responsible for the dissolution of such a Parliament.

“The National Assembly, therefore, is still vested with the authority to provide the Elections Commission with the time and resources, necessary for the conduct of credible general and regional elections,” Granger said, adding that the independence of the judicial branch has been respected.

“The legal challenges, in so far as the government is concerned, were neither frivolous nor calculated to frustrate the implications of the no-confidence vote,” he said, adding that the Speaker of the National Assembly was asked to review his decision, in light of the legal issues which arose as to the validity of the vote.

Granger said that the Speaker declined to reverse his decision and recommended that full, final and complete settlement of these issues, by a Court of competent jurisdiction, will place, beyond doubt, any question which may exist and serve to give guidance to the Speaker and to the National Assembly for the future.

“The government’s legal actions, therefore, can be viewed as a means of bringing clarity and certainty to the contentious issues, which arose as a consequence of the no-confidence vote.”

He noted, the High Court, in its ruling, issued certain declarations and that the government, while challenging aspects of the rulings, continues to comply with them.

“The government is conducting its affairs in accordance with the Constitution and with respect for the rule of law. The legal challenges have been taken to the appellate stage and a decision is expected from the Court of Appeal.”

He said that the competence of the executive branch is essential to the viability of the state, and that the President and ministers remain in office, as provided for by the Constitution.

Granger said that the Constitution is explicit in that notwithstanding its defeat, the government shall remain in office and shall hold an election within three months, or such longer period as the National Assembly shall, by resolution supported by not less than two-thirds of the votes of all the elected members of the National Assembly, determine, and shall resign after the President takes the oath of office, following the election.

“The Constitution contemplates continuity of the government. There is no legal impediment that restrains the government from exercising its functions or requires it to assume only ‘caretaker’ functions.

“The government continues to protect the country’s borders, natural resources, sovereignty and territorial integrity and to fulfill its international obligations. Citizens will continue to be provided with public services at the central, regional and local levels to ensure their welfare. Life goes on,” he stated.

President Granger, who is expected to be the coalition’s choice for the post of president, when the elections are finally held, said that the electoral process must be credible.

He said that the government, during its engagement with GECOM, gained the impression that, considering the small size of the national population, the existing list of electors was “inflated” and needed to be sanitised. It is the Commission’s responsibility to determine how efficiently and how quickly this could be achieved.

“I cannot influence, interfere with or instruct the Commission in its work. I am guided by its advice as to its readiness to conduct elections before I make a proclamation on the date of those elections,” he surmised.

He said it would be reckless of him to announce a date for elections, without being satisfied that the Commission would be in a position to guarantee credible elections.

Granger said that he expects that, with the advice of the Commission and with the support of the Opposition in the National Assembly, he should be able to proclaim a date, as early as possible, for the conduct of regional and general elections.

“I rely on the Commission’s readiness, the provision of funds and the expansion of time to conduct credible elections by the National Assembly. I rely on the outcome of legal challenges by the Court of Appeal. I rely, also, on public confidence in the institutions responsible for executing these processes. They demand political cooperation, not confrontation.

“Guyanese, it is my desire that credible elections be held in the shortest possible time. I shall continue to ensure that government’s actions are consistent and are in compliance with the Constitution and assure citizens of a credible electoral process.

“I urge everyone not to be intimidated by incendiary insinuations, aimed at instigating disaffection, which could affect preparations for elections. I assure everyone that the government will spare no effort to protect your fundamental rights and freedoms,” Granger said in his broadcast.