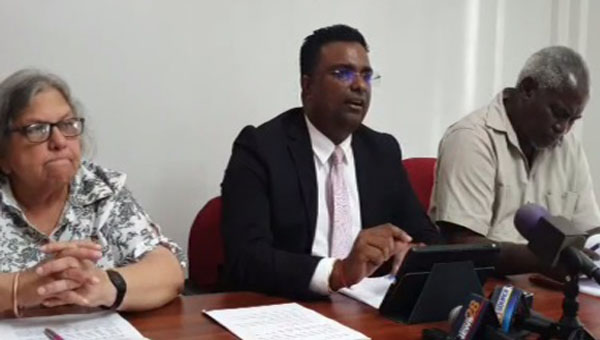 GEORGETOWN, Guyana, March 20, 2019 (CMC) – Opposition-nominated commissioners of the Guyana Elections Commission (GECOM), on Tuesday, distanced themselves from a letter, sent to President David Granger, indicating that fresh regional and general elections could only be held in Guyana in “late November”.

The Commissioners – Bibi Shadick, Sase Gunraj and Robeson Benn – said they were not consulted on the letter, written by GECOM chairman, retired Justice James Patterson, in which he said that the Commission would be in a position to conduct General and Regional Elections, no earlier than late November, with an Official List of Electors having a qualifying date of October 31, 2019.

Benn told a media conference that they only became aware of the letter, when they attended a meeting of the Commission, on Tuesday, that was described as a continuation of an earlier meeting.

“We, on this side, naturally walked out at this point and, in so doing, the question we posed and the issue we always had with this position arising out of GECOM, which we warned would arise somehow, in the delays which we felt were being engineered in GECOM — and perhaps with the collusion of agencies and persons outside of GECOM — that there was an attempt to delay the elections, and that any delay of elections, which were founded in the no confidence vote of December 2018, would be unconstitutional and illegal,” Benn said.

President Granger has said in the past that he could not announce a date for credible elections, until he receives the assurances from GECOM, even though the main opposition People’s Progressive Party (PPP) has said the polls must be held, no later than March 21, in keeping with the Guyana Constitution, following the successful motion of no confidence that brought about the downfall of the coalition government on December 21, last year.

Under the Guyana Constitution, elections must be held no later than 90 days after a successful motion of no confidence against the government or that the period could be extended by a special majority in the National Assembly.

Opposition Leader, Bharrat Jagdeo, has accused GECOM of playing to the tune of the coalition government, and has said that the PPP would regard the government as being illegal, after March 21.

Benn said, had GECOM soon after the motion of no confidence was passed. started work for having the elections, within the 90 day period, as prescribed by the Constitution, would have prevented the impasse, now before it.

He added that in the months, following the vote in the National Assembly, two positions clearly emerged, with one party sticking to the provisions of the Constitution and the other, bringing up the issue of house-to-house registration.

“We want to unequivocally state here, again, that we reject the adoption of a position, which forces us into ignoring the Constitutional imperatives, the Constitution itself in relation to this matter,” Benn said, adding “and the fact that the chairman of the Guyana Elections Commission can write this letter, without having it discussed…and democratically arrived at…clearly shows that he thinks he is running a court room…”

The opposition Commissioners said that while the signature on the letter to President Granger belongs to Patterson, they strongly believe that he was not the author and that “the language is not his”.

Shadick said that Patterson is a person, “who takes decisions on his own”, defending the decision to walk out on the deliberations of GECOM.

Gunraj contended that the elections could still have been held, without the need for house-to-house registration, which he insisted, was not a legal requirement for elections here.

“It is not something that is founded in any law that I am aware of, or in any policy that is made available to me,” he told reporters, adding “what I am aware of, is the necessity for the holding of national elections, which are regional and general elections within 90 days of a successful passage of a no confidence motion, which we all know, was on the 21st December, 2018″.

“We also know there has been no extension of the time, in which an election ought to have been held,” he said, noting that the opposition would be unfolding plans, in the future, to protest the present situation.

“I will not tell you what options are available to us, because the element of surprise is necessary to give maximum effect to some of these options…,” he added.