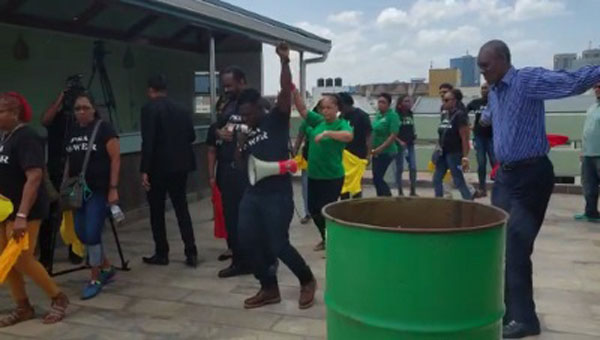 PORT OF SPAIN, Trinidad and Tobago, March 20, 2019 (CMC) – President of the Public Services Association (PSA), Watson Duke, on Tuesday, accused both the government and the main opposition United National Congress (UNC) of neglecting the working class in Trinidad and Tobago, as workers, employed at the judiciary, stayed away from their jobs for a second consecutive day.

The workers are participating in what the PSA called a “holiday for justice”, after the union said that their jobs were being threatened, under a restructuring program being undertaken by the judiciary.

A notice, posted on the doors of the courtroom of at least one judge, said, due to the absence of support staff, a trial had to be postponed, while several other cases that were listed for hearing by other judges, had to be postponed.

Judicial support officers, court marshals, ushers and auxiliary staff, assigned to the three High Courts and 13 magistrate courts, stayed away from their work, protesting what they say is proposed termination from their posts and absorption into the general public service. The public servants say that their jobs are likely to go to contract workers.

But in a statement, posted on the website of the Judiciary, it noted that talks were on-going with the PSA and “contrary to what has been said, the union’s executive asked for certain information and documentation, which have been provided.

“To date, the judiciary has had no feedback from the PSA on its presentation or on the documents sent. Cognizant of the fact that change sometimes causes discomfort, the judiciary has put in place several initiatives and is establishing a well-staffed help-desk for staff, who wish to ask specific questions and receive specific guidance.”

Duke warned that if the issues are not properly addressed, within the next three months, he intends to visit the Parliament.

“Because the governance of this country, whether it be PNM (People’s National Movement) or UNC, is not working for us. They make their plans for Mr Big and Mrs Big and whenever they do their plans…(it is) for them and for their pockets to grow,” he told reporters, adding that the political parties were intent on having workers remain as members of the “working poor”.

“So, today, we have burned the red, because the red at this point in time are the perpetrators of evil upon the working class. They are the authors, they are the architects of our demise,” Duke said, adding that an estimated 30,000 workers have lost their jobs in recent times.

Duke said that if the opposition had the interest of workers in mind, the party would seek to get workers to take to the streets in protest.

“They have so many lawyers in the UNC, why don’t they do us a favour and give us some free attorneys. They too are ruled by the special elite, called the ruling class,” Duke said, adding that he would be going across the island, in the next three months, in an attempt to get people to join a movement to challenge the dominant two political parties.

“If we could find 41 people from the 80,000 that we represent, we are going to challenge them – win, lose or draw. We must have people with which we can vote. We must have some people that could articulate our views in the Parliament,” he said.