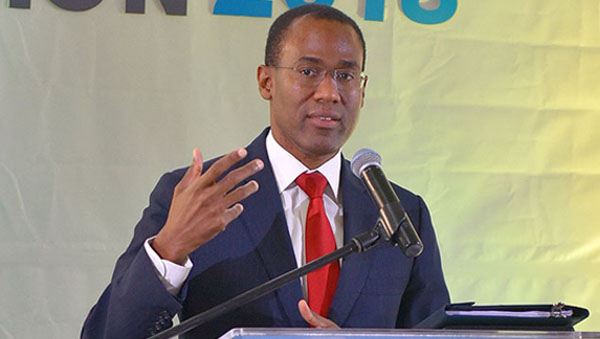 KINGSTON, Jamaica, March 20, 2019 (CMC) – The Jamaica government says the country is now embarking on the next phase of economic reforms, which will ensure that monetary policy delivers low, stable and predictable inflation.

Finance and Public Service Minister, Dr. Nigel Clarke, addressing the XXII Workshop in International Economics and Finance, which ended here, on Tuesday, said that the strategy, referred to as “inflation targeting”, is a monetary policy regime, in which a central bank has an explicit target inflation rate for the medium term, and informs the public.

He said an inflation-targeting central bank will raise or lower interest rates, based on above-target or below-target inflation, respectively.

Clarke said that this “inflation targeting” regime is gradually being incorporated by the Bank of Jamaica (BOJ) “as the cornerstone of monetary policy”.

“Full-fledged inflation-targeting will only become a reality, when we complete our next phase of central bank reforms or modernisation, to make the Central Bank independent, and to upgrade its governance framework, putting inflation-targeting as the centrepiece of its monetary policy objective,” he said.

The Finance Minister noted that the country has been able to reach this milestone, having engaged in an “unprecedented period of fiscal consolidation”, over the past several years.

“During this period, Jamaica has had the remarkable accomplishment of reducing its public debt, by a half of its gross domestic product (GDP), in a very short time, without handout, without bailout or without debt relief from friends — and that’s an achievement that we are very proud of,” he said.

Meanwhile, Governor of the Central Bank of Paraguay, Carlos Fernandez Valdovinos, said that given the macroeconomic stability that Jamaica now enjoys, the environment is ideal for the country to start adopting an inflation-targeting regime.

“This is the right time to start doing all the necessary reforms. It is very bad to try to do the reform, during a crisis,” he said, as he spoke on the topic, “Inflation-Targeting in an Emerging Market Economy. Why, When, How”, while giving an insight into the experiences of Paraguay, regarding inflation-targeting.

The workshop, which was hosted by the BOJ, brought together top researchers and policymakers, within the Western Hemisphere, to discuss recent theoretical and empirical advances in international economics and finance.

It was organised by the Universidad Torcuato Di Tella, (UTDT) of Buenos Aires, Argentina, the World Bank, the Inter‐American Development Bank (IDB) and Latin American and Caribbean Economics Association (LACEA).

The workshop was aimed at gaining a better understanding of the macroeconomic problems, faced by Latin American countries and to encourage research on those subjects.

The organisers said that 11 papers, on a wide range of economic issues, was presented and discussed, with a major focus on inflation-targeting and monetary policy in emerging economies.