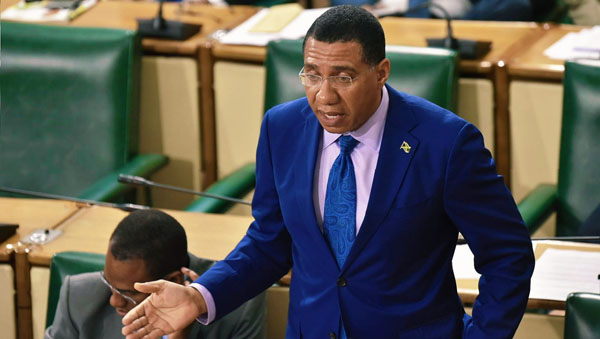 Holness, who was making his contribution to the 2019/2020 Budget Debate in Parliament, on Tuesday, said “the government has performed well”, and there is no need for the main opposition People’s National Party (PNP) to remind him of challenges.

“I am the first to admit, that there is room for improvement. However, I can also stand here, confidently, today, and say, without fear of contradiction, that this government has done a much better job of managing the affairs of the people, than any government the opposition has ever formed.

“The fact is, that even with the challenges, which we acknowledge, there has never been a period in the history of Jamaica, where the affairs of the country have been so managed that we can report four consecutive budgets, which were either revenue-neutral, no new taxes or a reduction of taxes,” said Holness, as he referred to the J$14-billion tax giveback, announced by Minister Finance, Dr. Nigel Clarke, when he opened the Budget debate, earlier this month.

In his presentation, titled “Building a New Jamaica”, the Prime Minister addressed several issues, including plans to add the auto-immune disease, lupus, to the list of illnesses covered by the National Health Fund (NHF).

He told Parliament that adding lupus to the list of illnesses, covered by the NHF, was economically sustainable.

“It is estimated that approximately 6,000 individuals in Jamaica have the condition, with the vast majority being females. The National Health Fund, an agency of the Ministry of Health, is now celebrating 15 years of service to the people of Jamaica. I am happy to announce, that the NHF will be adding lupus to the list of conditions covered by the NHF Card, by April 30, 2019. This is expected to reduce the impact of this life-threatening disease and improve patients’ quality of life, through improved access to medication,” he announced.

Concerning crime, Holness said the government has adopted a multi-pronged approach to addressing the causes, as well as the symptoms.

“While emphasising a targeted crackdown on perpetrators, through methods, including the use of powers under the States of Emergency Act and the declaration of Zones of Special Operations (ZOSOs), there is strong recognition of the importance of social interventions to build volatile communities and reduce the economic and social exclusion that supports criminal activities,” he said.

The Prime Minister, in his three-hour presentation, said that the reduction of crime and the restoration of public order, includes the delivery of a range of social interventions in a coordinated system of multi-sectoral programming.

“To this end, the Jamaica Social Investment Fund in FY 2019/2020 will prioritise interventions that collectively will build national and community capacity for crime reduction, including: The JSIF’s approach to the transformation of volatile and economically vulnerable communities (that) is unique in its focus on delivering social interventions (social services and infrastructure interventions) in partnership with communities, State and other development partners, as a means to community security and transformation,” he explained.

According to Holness, his administration will, among other things, start work to rehabilitate and construct six police stations, that will directly benefit over 500 staff and approximately 103,000 residents.

He also pointed to another major challenge for the government – that of disruption to regular water supply, caused by a multiplicity of factors, road improvement works, repairs under the non-revenue water programme, and traffic accidents. Nevertheless, this year the government is increasing its effort to ensure more Jamaicans have access to an economical and reliable supply of potable water.

“Over the last two years, NWC has expended almost $9 billion on water supply and sewerage projects, across the island, from its own budget. This does not include the major spend on its intensified collaborative work with the National Works Agency (NWA) in replacing and upgrading,” he pointed out.

He said that in another month, the corporate area water woes should come to an end, when the major project to repair broken lines on the Mandela Highway, is scheduled to be completed.

He said the NWC is currently losing 48 percent of potential revenue and this places the utility company at a fiscal risk.

Another issue was that of reducing the interest rate, and an increase in the loan ceiling are among new benefits for contributors to the National Housing Trust (NHT).

Holness said the initiatives, which will take effect in the next fiscal year, are aimed at improving affordability and access to NHT’s products.

“The NHT will reduce interest rates by one percentage point, for all mortgagors, in keeping with market trends of declining interest rates. In addition, the NHT will widen the current income bands to account for changes in earning levels, since the last adjustment,” said Holness, who revealed that the NHT will also provide inter-generational mortgages.

The aim is for a younger sibling or child to agree to carry the mortgage obligation, subject to affordability, when the older mortgagor retires or dies.

The Prime Minister also announced that the western end of the island will see road infrastructure development, through the Montego Bay Perimeter Road Project, adding that the14.9 kilometre bypass is currently in the design phase and is expected to be four lanes, with the usual safety barriers.