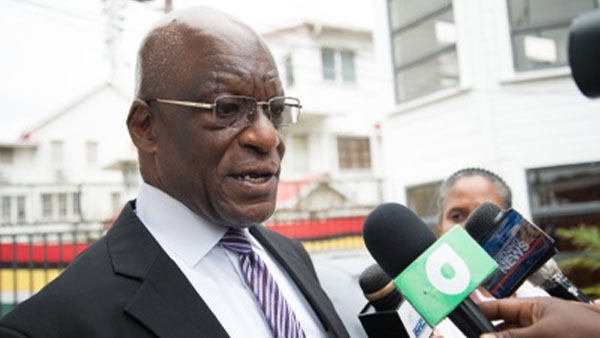 GEORGETOWN, Guyana, March 21, 2019 (CMC) – The Guyana government has strenuously denied making a Guyana $72.8 million payment to the Grenada constitutional expert, Dr. Francis Alexis, for the services he provided to the Attorney General’s Chambers and Ministry Legal Affairs (AGC/MOLA) in the appeals, arising from the passage of the motion of no confidence against the coalition administration.

In a statement, the AGC/MOLA said it has become aware of an “image, purporting to be a payment voucher” to Alexis, being circulated on the various social media platforms of many online users, including that of a former attorney general, here.

“The AGC/MOLA, frontally deny and reject, out of hand, such a payment was ever made. By no stretch of imagination, this document resembles or even comes close to the payment vouchers, utilized by government agencies,” the AGC/MOLA said in the statement.

The statement said there were a number of discrepancies that had been detected in the document, now in circulation on the social media, including that the “amount quoted by the document is substantially inaccurate and misleading”, and that the “cheque number is not related to any payment for Dr. Alexis”.

“Many social media users, who are acquainted with the government’s payment system, can easily detect the irregularities and inconsistencies with this document.  Over the years, the government of Guyana, irrespective of which political party is governing, has developed a standardized system of payment and documents that should be utilized, when offsetting these payments throughout all ministries, nationwide. This transaction is no different and the system cannot be unilaterally abrogated,” it explained.

The government said, moreover, it is imperative to note that the two officers’ names that are attached to the AGC/MOLA appearing on the document, cannot carry out such a transaction, since they “cannot approve such payment (and) do not make payments of any sort”.

“Furthermore, this must be seen as yet another blatant attack on professionals of the public service, attached to the AGC/MOLA, and by extension, the government of Guyana,” the statement said, adding that “the circulation of this voucher, along with initial speculation, associated with Dr. Alexis being retained by the AGC/MOLA, is calculated to be entirely mischievous and is highly unacceptable”.

Alexis had teamed up with the lawyers for the government, who has appealed a High Court ruling that the motion of no confidence, passed on December 21, last year, is valid.

The motion had been moved by Opposition Leader, Bharrat Jagdeo, and received the backing of a former government backbencher, ensuring that the one-seat majority, which the coalition enjoyed in the 65-seat national Assembly, was overturned.