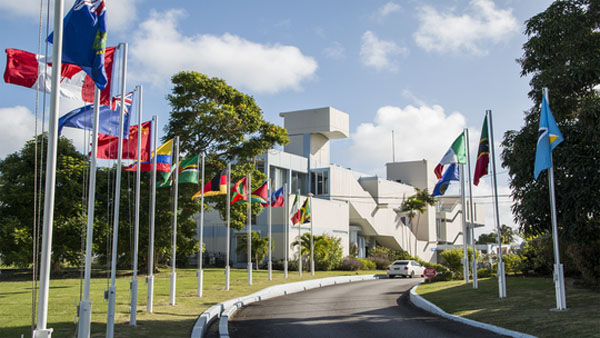 Headquarters of the Barbados-based Caribbean Development Bank (CDB). Photo courtesy of the CDB.

BRIDGETOWN, Barbados, March 22, 2019 (CMC) – The Barbados-based Caribbean Development Bank (CDB) says Guyana is on the verge of a sharp increase in economic growth, but immediate prospects partly depend on ending political uncertainty.

It said that the coalition government is targeting 4.6 percent gross domestic product (GDP) growth in 2019, with all major sectors contributing. But the bank noted that increased political uncertainty, in early 2019, may dampen this momentum.

The National Industrial and Commercial Investments Limited (NICIL) bond issue will push total public and publicly-guaranteed debt above 60 percent of GDP in 2019, but that ratio is projected to decline, sharply, after 2020.

“Business reforms are needed to improve competitiveness and facilitate inclusive growth. Although efforts are being made to increase linkages, between the oil industry and the rest of the domestic economy, there is a risk that oil production could dominate exports and lead to exchange rate appreciation, which in turn, could harm the competitiveness of other sectors,” the CDB said in its “Country Economic Review 2018-Guyana”.

It observed that the Natural Resources Fund (NRF) can help to manage some of these risks, but business-sector reforms will also be necessary. Improvements are needed in reducing energy costs, the speed of getting construction permits, and trading across borders, it added.

Economic growth in Guyana increased to 3.4 percent in 2018 and the CDB said this was mainly due to increased construction activity.

Sugar output fell, as restructuring of the industry continued, while there was mixed performance in the extractive industries. Fiscal performance was boosted by a tax amnesty, which increased revenues and helped stabilise the overall deficit. Public debt as a percentage of GDP increased.

The CDB reported that preparation for oil production continues, with commercial production due to commence in 2020, and noted that this will increase economic growth and provide windfall revenues for the Guyana government.

“The proposed Natural Resources Fund (NRF) is supposed to help manage the risks associated with this new development, including minimising negative impacts on other non-oil industries. Reforms to the doing-business environment are also necessary to ensure that non-oil industries can become more competitive. Other risks include political uncertainty.”

The CDB said that a tax amnesty boosted revenue collection, allowing the fiscal deficit to stabilise. Between January and September 2018, interest and penalties on outstanding tax liabilities were waived, resulting in extra collections worth about one per cent of GDP.

It said that total revenue collected was 11 percent more than in 2017 and that total expenditure was 8.7 higher, mainly due to an increase in transfers.

Capital expenditure was up 0.7 percent, although slightly below budget. Performance in public enterprises deteriorated, and their combined deficit grew. Sugar production at the Guyana Sugar Corporation (GuySuCo) fell, and Guyana Power and Light and Guyana Oil Company both faced higher fuel costs.

The debt stock rose, as did servicing costs. However, with the economy growing, the ratio of debt to GDP fell to 44.5 percent in 2018. In addition, government overdraft was about six percent of GDP. External debt service increased, because of higher principal payments to bilateral and multilateral lenders, rising interest rates, and exchange rate depreciation. The fall in domestic debt reflected a lower stock of treasury bills.

The CDB said that net credit from the banking system increased, and that further measures were taken to strengthen the financial sector.

Net domestic credit grew by 13.6 percent in the first 10 months of 2018, reflecting higher loans to both Central Government and the private sector. Commercial loans were up for agriculture, manufacturing and construction, but down for mining.

The ratio of gross non˗performing loans to total loans was 12.8 percent at the end of June, 22 basis points less than in June 2017.

The CDB reported that gross international reserves fell, to just above three months of imports.

“The overall deficit tripled to 4.9 percent of GDP. The current account deficit worsened, as export earnings fell and imports rose, especially fuel. The services deficit also deteriorated. The financial account surplus strengthened, thanks to higher foreign direct investment and loan disbursements. The balance of payments deficit was funded by debt relief and debt forgiveness, worth US$76.6 million, as well as the drawdown on international reserves,” the CDB added.