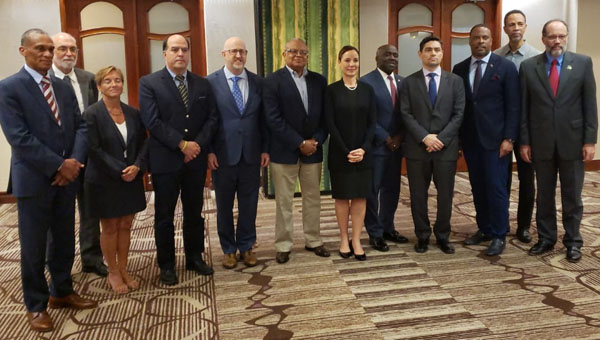 A brief statement, issued by the Guyana-based CARICOM Secretariat, today, noted the “participants expressed deep appreciation to Canada for facilitating the convening of the meeting”, that Guaidó had joined the discussions “via video conference”, and that regional foreign ministers had met with his delegation in Bridgetown.

Canadian High Commissioner to Barbados, Marie Legault, who has a long career in international diplomacy, was present at the talks, amid reports that she did so, as a member of the Lima Group that has opposed President Maduro’s second term as president, and voted on a resolution at the Organisation of American States (OAS) to that effect in January.

“In accordance with the decision, of CARICOM Heads of Government, to provide good offices, in facilitating a peaceful resolution to the Venezuela crisis, through a meaningful internal process, a delegation of Caribbean Community (CARICOM) Foreign Ministers met with Mr. Guaido and a delegation of his representatives in Bridgetown, Barbados, on 23 March 2019. Mr. Guaidó joined the discussion via videoconference,” the statement noted.

CARICOM leaders at their inter-sessional summit in St. Kitts-Nevis, last month, had reiterated their position of non-interference in the internal affairs of Venezuela, and said they were prepared to mediate in the process to bring about a peaceful resolution to the crisis.

Guaidó, who is backed by the United States, Canada and some other Western countries, is seeking to unseat President, Nicolas Maduro, who was sworn into office, for a second consecutive term, in January.

Maduro has the backing of Russia, China and Cuba, among other countries.

The statement said that CARICOM Foreign Ministers “acknowledged the meeting, as a significant initial step, in a series of potential engagements that should unfold by agreed mechanisms, within the framework of the Constitution of Venezuela and the rule of law”.

“The meeting provided a greater understanding of Mr. Guaido’s views and perspectives, on how to move forward in the search for peaceful solutions, as well as his willingness to take part in meaningful discussions. The participants accepted the benefit of further engagement,” the statement added.

Guaidó, later, on his twitter page, said the talks were mainly an opportunity for him “to express his views on the situation in Venezuela and to discuss the way forward”.

He also reiterated the “very strong relationship” between Caracas and the 15-member CARICOM grouping.

Informed sources told the Caribbean Media Corporation (CMC) that a similar meeting is being planned with Maduro and his delegation, and that the talks could take place, as early as this week. No venue has yet been given for that round of discussions.

But the CARICOM’s statement, on Sunday, made no mention of any planned meeting with Maduro’s delegation.