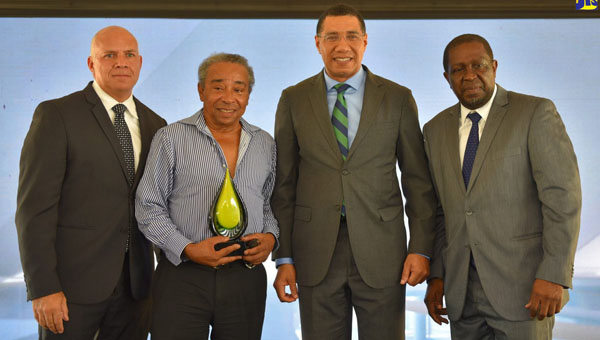 Jamaican Prime Minister, Andrew Holness (second right), with team leader for the winning entry in the government’s Houses of Parliament Design competition, Evan Williams (second left), after presenting him with a trophy for also copping the People’s Choice Award, during the awards ceremony at National Heroes Park, in downtown Kingston on Wednesday (March 27). Also pictured (from left) are Patron of the Design Competition, Gordon Gill; and Chairman of the Urban Development Corporation (UDC), Senator Ransford Braham. The winning team won a total of $7 million for its entry, titled ‘Out of Many, One People’. Photo credit: Yhomo Hutchinson/JIS.

Construction Of Jamaica’s New Parliament Building To Begin By 2021

KINGSTON, Jamaica, March 28, 2019 (CMC) – The Jamaica government says construction of the new Parliament building is expected to commence by 2021.

Prime Minister, Andrew Holness, made the statement, as he announced the winner of the government’s House of Parliament Design competition that will provide the concept for the structure, which will be built at National Heroes Park.

The winning concept design, by Design Collaborative, is titled “Out of Many, One People”, and features an interconnected building, with space to accommodate a football field and an area for outdoor movie watching.

Speaking at the award ceremony, yesterday, Holness praised the participants for embarking on a “long but rewarding” journey of designing a Parliamentary building that will not just be an edifice, but a “working building”, of iconic value that will become a tourist attraction.

“We have to make sure that the Parliament is functional and that the people, who occupy the Parliament, their capacity to produce is improved,” he said, adding that the construction of the building is necessary to improve the governance of the country.

Holness said he is “very encouraged” by the work of the architects and is confident that “Jamaica has a great future in architecture”.

He said the government will strive to integrate more architecture in developing the country’s built environment, noting that this is a valuable lesson, coming out of the competition.

“Too often, we are doing buildings, without a broader consideration for how that building impacts on the wider built environment, and how people function and enjoy the space in which they live,” he said.

The Design Collaborative team also copped the People’s Choice award in the competition, having received the highest number of votes, during the voting period, from January 29 to February 28.

The winner was chosen from an initial 24 submissions. The entrants were narrowed down to the top five, who were each awarded two million dollars for advancing to the second stage of the competition.

The winning team received a total cash prize of seven million dollars, and Holness said he expects the final design to be completed by April 2020.