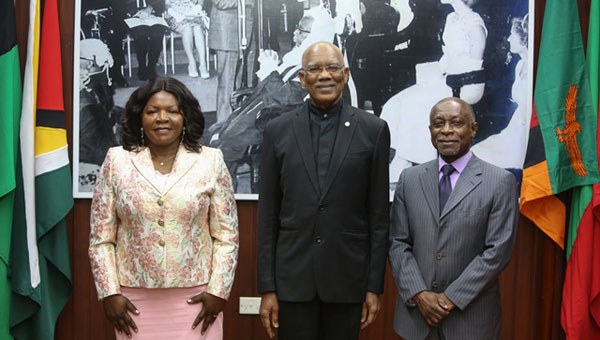 GEORGEROWN, Guyana, March 28, 2019 (CMC) – President, David Granger, says he is not impressed, with the statement by the Private Sector Commission (PSC) and its affiliates, that “political uncertainty” is gripping the country, as it awaits a Caribbean Court of Justice (CCJ) ruling, on the ongoing political situation in the country.

“There’s no chaos or confusion or crisis in the political situation. Everything that has happened, since the 21st of December, has been logical, and, on the part of the government, it has been within the framework of the law.

“I do not know how valid that perception is but, as far as I’m concerned, the government has done nothing to engender any disorder or any despair in the business community. So, I don’t want to say whether that’s a valid perception or not, but we are continuing to work,” Granger said, in reaction to the private sector’s statement.

The PSC said that it wants the Trinidad and Tobago-based CCJ, which is Guyana’s highest court, to deliver a “prompt” resolution to the appeals that have been filed by Opposition Leader, Bharrat Jagdeo, and attorney, Christopher Ram, with respect to the ruling of the Court of Appeal, whih invalidated the December 21, 2018 opposition-inspired motion of no-confidence that had toppled the Granger-led coalition administration.

By a majority-decision, of 2 to 1, the three-member panel of appellate court judges, ruled that the no-confidence motion was not passed, based on 34 votes not being obtained.

Jagdeo wants the CCJ to conduct an early hearing of the case, because of its “national importance”.

In the statement, the PSC said Guyana is now going through “political uncertainty” and it may be affecting the business climate. Further, it argued that discussions, with local and international businesses, have resulted in expressions of reservations in investing, as the “uncertainty” continues.

It noted that there has been a reduction in government and private sector contracts, directly attributable to the uncertainty.

“The Commission calls on the Caribbean Court of Justice to provide a prompt resolution to this matter, so that both local and international organizations and businesses would again see Guyana as a country with boundless opportunities,” the PSC said.

But Granger said that everything, being done by his government, had been undertaken, within the laws of the country.

“So, I don’t think that the perception that you’ve mentioned, that you’ve spoken to me about, is a valid perception, and we will continue trying to do our best, to give the people of Guyana a good government and a good life,” President Granger added.

He pointed out that while the main opposition People’s Progressive Party (PPP) has said that it would be boycotting the National Assembly, until the CCJ ruling, Parliament will soon convene to ensure that the Guyana Elections Commission i(GECOM) is properly funded, to prepare for and host general and regional elections, whenever they are called.