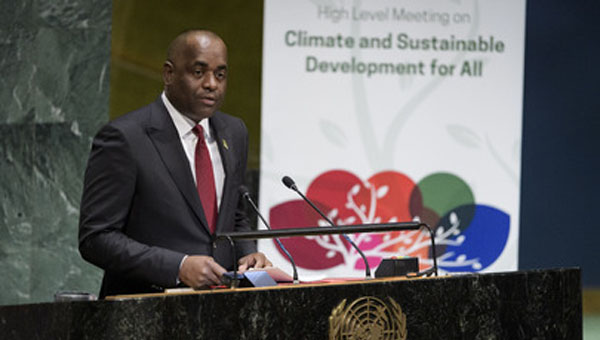 Roosevelt Skerrit, Prime Minister and Minister for Finance and Public Service of Dominica, addresses the UN high-level meeting on Climate and Sustainable Development for All, on March 28.

UNITED NATIONS, New York March 29, 2019 (CMC) – Dominica’s Prime Minister urged the international community, yesterday, to assist Small Islands Developing States (SIDS) to deal with the impact of climate change, pointing out that his island has defied the odds, in the aftermath of the passage of Hurricane Maria, in 2017.

Addressing the UN’s Climate and Sustainable Development for All meeting here, Skerrit, who is championing Dominica as becoming the world’s first climate-resilient country, said the survival of SIDS still remains in jeopardy.

“Despite our social, economic and environmental risk; vulnerability; and precarious positions in the macro global framework, international rules compel small islands developing states, like mine, and those of my Caribbean brothers and sisters, to compete with, and on the same terms, as the world’s largest economies.

“The confluence of these factors, when combined with the impact of climate change, has placed many SIDS at risk, of not achieving the SDGs (Sustainable Development Goals),” Skerrrit told the high-level conference, which was themed, “Protection of the Global Climate for Present and Future Generations of Humankind in the Context of the Economic, Social and Environmental Dimensions of the 2030 Agenda for Sustainable Development”.

He said the SIDS “very survival is in jeopardy”, adding that the global community  must now “skill-up ambition and joint efforts to hold…temperatures in the range of 1.5 degrees Celsius, recognising that we are on the frontline of the battle of climate change, now is the time for the global community to take decisive action to support SIDS, in building capacity, ensuring clear predictable sources of financing, developing low carbon technology, offering a future to our young people, providing a descent standard of living for our citizens and securing our sustainable development”.

Skerrit had earlier told the conference that following the passage of Hurricane Maria, in September 2017, which left damage, estimated at millions of US dollars and 224 percent of gross domestic product (GDP), Dominica was now on an upward path to development.

He said the island’s recovery has been led by the resilience of its people, both at home and abroad, noting that the Economic Commission for Latin America and the Caribbean (ECLAC) has predicted that the Dominican economy will grow by nine percent this year.

“Our infrastructure is being built. New homes and schools have gone up and a new modern hospital is under construction. The new structures are stronger and better than before, in order to make them more hurricane-resistant.

“Dominica has defied the odds and we are on a clear growth-trajectory. Our national recovery has been led by the resilient and resourceful people of Dominica at home and abroad who were determined not to be defeated by the mighty forces of nature,” Skerrit said, acknowledging the support of the international community.

He added, from the seeds of Hurricane Maria’s destruction, “grew my administration’s policies and actions, to build the first climate-resilient nation in the world, and to usher Dominica into a bright future”.