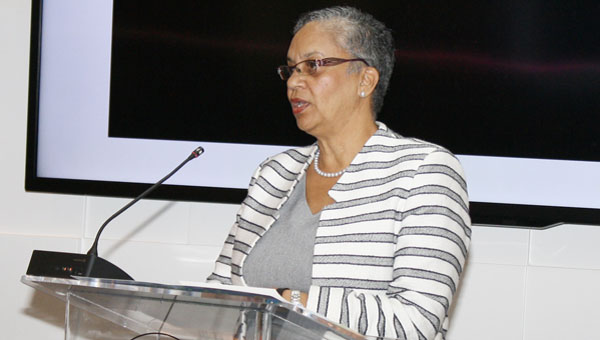 Monica La Bennett is the Vice-President of Operations at the Caribbean Development Bank.

The CDB has approved a EURO$249, 860 grant from the German international development agency, Deutsche Gesellschaft für Internationale Zusammenarbeit (GIZ), for the initiative.

“The grant from GIZ will help our Borrowing Member Countries, in the OECS, tackle the effects of climate change and make the transition to resilient, low-carbon economies,” said Monica La Bennett, CDB Vice-President of Operations.

The CDB said, that following the Paris Agreement, the historic international climate change deal, made at the 21st Conference of the Parties to the United Nations Framework Convention on Climate Change (UNFCCC) in 2015, the OECS countries outlined their intended climate actions, for after 2020, to meet their obligations under the Paris Agreement.

The venture will help those countries advance project ideas to the concept-note stage, so that they can be considered for funding by the Green Climate Fund (GCF), the Adaption Fund (AF) or CDB. It is planned that project concepts will be developed for four pilot countries – Dominica, Saint Lucia, St. Kitts and Nevis, and St. Vincent and the Grenadines.

Thirty technical staff, throughout the sub-region, will also be trained to use SOURCE, an online tool for project preparation and management. In addition, the OECS Commission will hold a workshop on priority investment projects.

“Eastern Caribbean countries are in great need of technical assistance and concessionary financing from CDB, GCF, AF and other emerging finance streams, to deal with the effects of climate change. This initiative will concretely support countries in the sub-region, so they can better meet their needs,” said La Bennett.

The activities of the venture will be completed by November 2019.