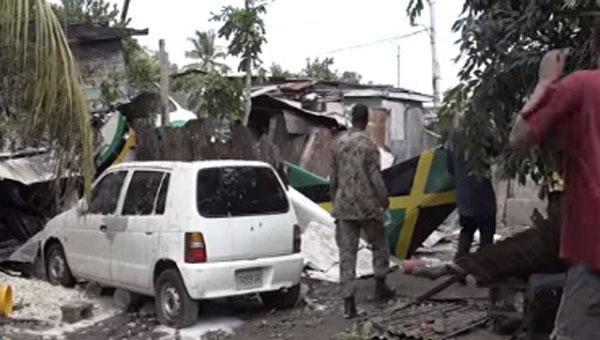 The Jamaican flag seen on the tail of the plane that crashed in 2016.CMC file photo.

Fallout From Report Of Fatal Plane Crash In Jamaica

KINGSTON, Jamaica, March 29, 2019 (CMC) – The Vice-President, with responsibility for Technology and Innovation, at the Caribbean Maritime University (CMU), Professor Noel Brown, says the Jamaica Civil Aviation Authority (JCAA) should state whether anyone should be liable for the 2016 plane crash that resulted in the deaths of three people.

“I am thinking that the report is out; it stopped short of saying that anyone is criminally-liable for anything. But that is a question that should be answered by the JCAA,” Brown said on a radio program, here.

The 60-page report, into the fatal plane crash, conducted by the JCAA, found, among other things, that the engine of the Cessna aircraft, which lost power shortly after take-off, was fitted with wrong and malfunctioning parts.

The investigators also found breaches, on the part of the Caribbean Aviation Training Center, which operated the plane.

Dawn Singh-Gilmore told the Gleaner newspaper that she was “going full speed ahead”, with regards to legal action in the death of her son.

“Somebody needs to answer to the families, how it is that we are going to be redressed,” said Singh-Gillmore, an education officer.

She told the newspaper that that outside of funeral expenses, pain and suffering, she has also been incurring medical bills, since the tragedy.

“It is heart-rending. I tell you, it’s hard on me, because I have to be paying back loans that I borrowed to send Ramone to school,” said Jacqueline Forbes.

Forbes told the Gleaner newspaper that she was also demanding, that someone be held accountable for the apparent negligence on the part of the JCAA and the flight-training school.

Speaking on the radio program, Brown said that even in this case, where the operators of the aircraft are known, the JCAA’s role cannot be overlooked.

“We know who the operators of the aircraft (were),  so if someone has to be held responsible, we know who would be held responsible……,” he said, noting also, that lessons can be learnt from the situation, and that the report has given useful insight into how things can improve.

“I think that a lot of things were unearthed in this report, and I think the JCAA can act on some of these recommendations and make the necessary changes; so that aviation in Jamaica is much more safer,” he told radio listeners.