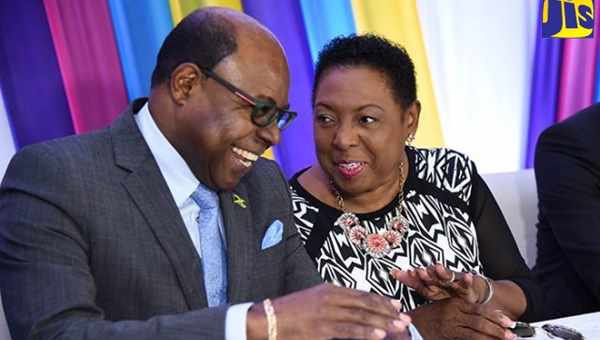 Jamaica's Tourism Minister, Edmund Bartlett (left) -- seen in light conversation with the country's Minister of Culture, Gender, Entertainment and Sport, Olivia Grange, at the launch of 2019 Carnival in Jamaica, at the Spanish Court Hotel in New Kingston -- said that the discussions with the James Bond movie producers are very advanced. Photo credit: Adrian Walker/JIS.

KINGSTON, Jamaica, April 1, 2019 (CMC) – Tourism Minister, Edmond Bartlett, says he will be meeting with the producers of the 25th James Bond movie — in England, next week — with a view to having some parts filmed on the island.

In an interview with the Jamaica Information Service (JIS), Bartlett confirmed that he and Entertainment Minister, Olivia Grange, will be travelling to Pinewood Studios to meet with the producers – Barbara Broccoli and Michael G. Wilson.

The studios have been the base for several productions, over the years, and are well-known as the home of the James Bond franchise.

Bartlett explained that the discussions with the producers are very advanced. The international media have reported that principal filming will take place in Jamaica and at studios in the United Kingdom.

Jamaica will feature as part of the yet-to-be-titled film, which is expected to be released in 2020.

It is not the first time that Jamaica has been featured in a James Bond flick, as the country was showcased in the 1962 film, “Dr. No”, and in “Live and Let Die”.

Bartlett said that showcasing Jamaica, once more, in such an iconic franchise as James Bond will have an impact on Jamaica’s tourism industry, providing “enormous eternal marketing” for the island.

Jamaica Promotions Corporation (JAMPRO) President, Diane Edwards, says her agency is working to establish a national film fund that will cover the cost of filming in Jamaica.

She said that the agency “is half-way down the road” with the establishment of the fund, noting that it will take approximately six to nine months to iron out certain details.

Edwards was speaking at the Jamaica Film, Animation and Music (FAM) Investor Forum at The Knutsford Court Hotel in New Kingston, on March 29.

The national film fund is an alternative to the rebate incentive program for filming that exists in countries, such as Costa Rica, Puerto Rico, the Dominican Republic, and Trinidad and Tobago.

The JAMPRO president explained that producers of blockbusters or destination films, such as Pirates of the Caribbean, go to those countries to film and, in turn, the governments underwrite 34 percent of the filming costs.

While Jamaica has no legislation in place that enables this kind of provision, Edwards said that JAMPRO has been offering “in-kind contributions” to attract film-makers.

Meanwhile, Managing Director of Aspire Funds Management Company Limited, Kerwyn Valley, said that Trinidad and Tobago’s film incentive “is one of the most attractive”.

He said his company has been investing in the development of Caribbean film-makers, and is looking to Jamaica, with a view to having films released online, as there are greater prospects for promotion and marketing through that space.

The Jamaica Film, Animation and Music (FAM) Investor Forum provided an opportunity for owners of creative works and the local investor community to network and make business deals.

During the event, a film pitch competition was held, with $500,000 awarded by the Ministry of Culture, Gender, Entertainment and Sport towards the production of a feature film.