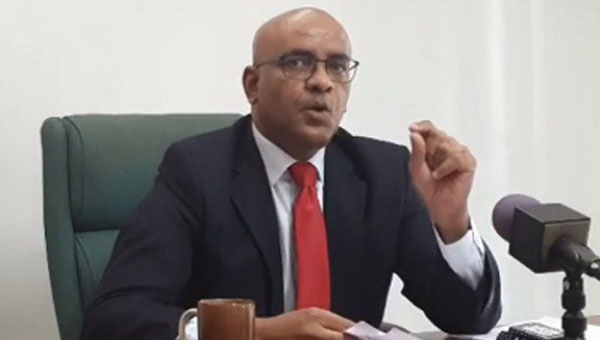 Opposition Leader, Bharrat Jagdeo, says that the Guyana government “Clearly ..... think Guyanese are fools, that we will buy this garbage that they shove on us and not recognise that they are taking us for a ride.”

“They were caught in a dilemma and they are trying to get out of that dilemma, because they are not sincere about it. It is a lack of sincerity and lack of honesty,” Jagdeo told a news conference, today.

President, David Granger, had said, earlier, while he has  accepted the resignation of the four members of his coalition administration — Minister of State, Joseph Harmon, who holds, both Guyanese and United States citizenship; Minister of Business, Dominic Gaskin; Minister of Public Service, Dr. Rupert Roopnarine; and Vice-president and Minister of Foreign Affairs, Carl Greenidge, all of whom hold Guyanese and British citizenship — their resignations will not take effect, immediately, as there are several processes, which have to be applied.

Granger said he wanted to make it clear that the replacement of Members of Parliament (MPs) can be done, only when those legislators submit their letters of resignation to the Speaker of the National Assembly, as is prescribed by the Guyana Constitution.

The High Court and the Court of Appeal ruled earlier this year that legislators who hold dual citizenships were not qualified to be Members of Parliament, in keeping with the Guyana Constitution.

Granger said he also wanted to remind the population that the nomination of new members can be done, only after the extraction of names from the National Top-Up list is approved by the Guyana Elections Commission (GECOM).

“As such, the four ministers, Mr. Carl Greenidge, Mr. Joseph Harmon, Mr. Dominic Gaskin and Dr. Rupert Roopnaraine will remain ministers until the aforementioned processes are completed,” he added.

But Jagdeo, who has said that his opposition colleagues, with dual citizenship, would not be resigning nor attending the sitting of the National Assembly on April 11, told reporters that the three statements, issued by the government on the matter, all appear to be contradicting each other.

Jagdeo proposed that the government appears not to be able to get its story right, and was intent on taking the population for a ride.

“Clearly these people think Guyanese are fools, that we will buy this garbage that they shove on us and not recognise that they are taking us for a ride”, Jagdeo said, adding that he had also taken note of the government’s statement that the former ministers would take on new roles in the government that do not require their presence in Parliament.

Jagdeo told reporters that such a move would only mean that taxpayers will have to continue to pay the salaries of the four former legislators, who would continue to enjoy the perks of working in the government.

Meanwhile, Jagdeo said that one of the three opposition legislators, with dual citizenship, has indicated that he does not intend to renounce his American citizenship.

Jagdeo told reporters that Adrian Anamayah told him that he has family commitments that would prevent him from giving up his American citizenship, and that he understood the position.

Jagdeo said the three legislators would be writing the Speaker of the National Assembly, soon, on the issue.