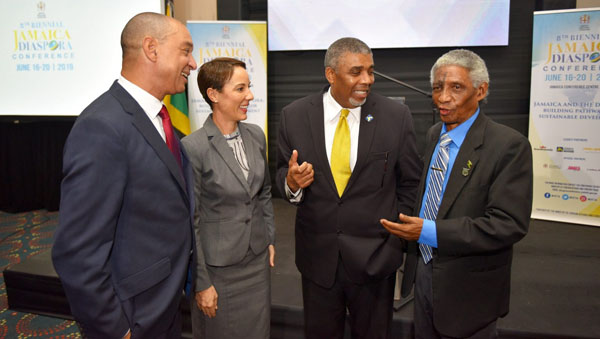 KINGSTON, Jamaica April 4, 2019 — The Government says it remains committed to implementing a robust Diaspora policy that provides the framework for effective partnerships, with Jamaicans living abroad.

In this regard, Foreign Affairs and Foreign Trade Minister, Senator Kamina Johnson Smith, says beginning next week, she will be leading focus group meetings “to take forward the consultative process in some cities, where our largest populations of the Diaspora reside”.

The Minister also encourages members of the Diaspora to read the draft policy on the Ministry’s website and offer feedback.

“We are particularly looking forward to the active participation of those, who are overseas, [and] Jamaicans at home as well. Your feedback will enrich the final outcome,” Johnson Smith said.

She indicated that feedback can be sent in writing to diasporapolicy@mfaft.gov.jm, by May 17, to ensure these are substantively considered for discussion at the conference.

“It is our intention that one of the principal tangible outcomes of this conference will be the finalisation of the Diaspora policy [so] that it may be presented to the Cabinet and the Parliament for its acceptance and implementation,” Senator Johnson Smith advised.

She was speaking at the launch of the Ministry’s eighth biennial Jamaica Diaspora Conference, at The Jamaica Pegasus Hotel in New Kingston on April 2.

Senator Johnson Smith said the Ministry continues to strengthen the Diaspora engagement strategy, which includes boosting the communication channels, between the island and the various areas where Jamaicans reside.

“Among work under way is the maximisation of the existing social and traditional media platforms to further connect with our people at different levels. It [also] includes improving coordination among departments and agencies to ensure greater efficiency in providing services to the Diaspora,” she said.

The Foreign Affairs Minister further noted that actions, taken in relation to the Diaspora, are guided by the country’s Vision 2030 Jamaica – National Development Plan, which is also aligned with the United Nations 2030 Sustainable Development Goals.

In his remarks, Government Senator and Chief Executive Officer (CEO) of GraceKennedy Limited, Don Wehby, said the Diaspora is of significant importance to Jamaica, as it represents “a significant reservoir of social and financial capital, which must be optimised for national development”. 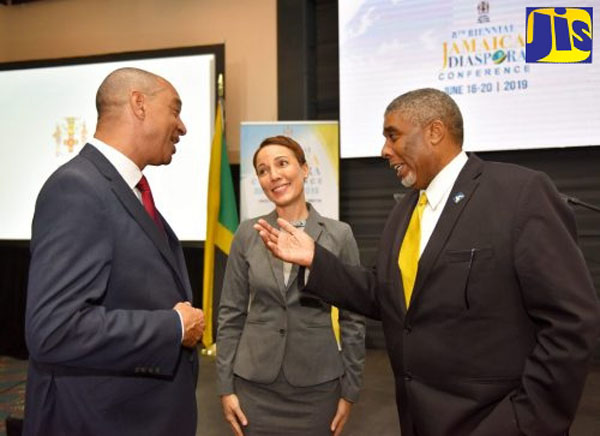 “As of 2017, it has been estimated that the Diaspora is three million strong. It invests in three main areas, namely stocks and bonds, savings, and investments in businesses. The latest value we have is US$1.2 billion. Jamaica receives remittance flows of US$2.2 billion, which accounts for 16 percent of the gross domestic product,” he said.

Wehby, who is Conference Chairman, informed that the Diaspora continues to make significant direct contributions to agriculture, education, health, and community development initiatives.

He said the biennial conference is an example of tangible public-private partnership that galvanises Jamaicans’ support, at home and abroad, around issues of national importance.

Senator Wehby further stated that the 2019 conference’s program, content and format builds on the feedback that has been received from similar previous engagements, and will seek to re-energise Jamaican Diaspora partnerships to support the country’s priorities “with respect to the United Nations Sustainable Development Goals”.

For his part, Diaspora Advisory Board member, Wayne Golding, said the connections with the Diaspora remain strong, as its members are keen on being involved in key developments in Jamaica.

The conference, which will be held under theme ‘Jamaica and the Diaspora: Building Pathways for Sustainable Development’, is scheduled for the Jamaica Conference Centre, downtown Kingston, from June 16 to 20.

The focus areas for dialogue and expected outcomes will take into consideration important global trends and their impact on the future marketplace and workplace, as well as critical partnerships.

Legacy partners for the conference include the Jamaica National Group, GraceKennedy, Victoria Mutual Building Society and J. Wray and Nephew.

Official partners include the Jamaica Promotions Corporations (JAMPRO), the Jamaica Tourist Board (JTB), and Caribbean Airlines.