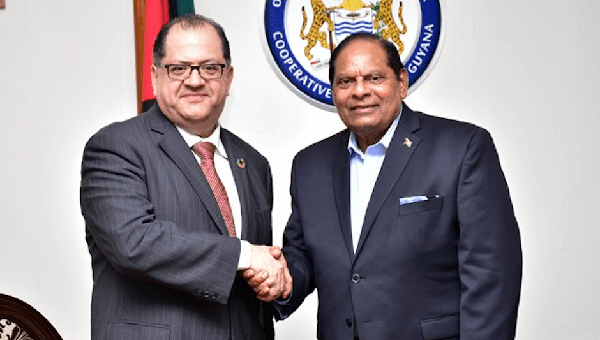 GEORGETOWN, Guyana, April 5, 2019 (CMC) — The assistant UN Secretary General and UNDP (United Nations Development Program) Regional Director for Latin America and the Caribbean, Dr. Luis Felipe Lopez-Calva, is on a one day visit to the country.

According to the Prime Minister’s office, during an hour-long meeting, late Wednesday, the UN envoy briefed Prime Minister, Moses Nagamootoo, on several programs that have the involvement of the UNDP, including drafting of the Green State Development Strategy (GSDS).

He expressed satisfaction with the level of collaboration between the UN agency and the government of Guyana.

The Prime Minister, who holds ministerial responsibilities for Constitutional Reform and Parliamentary Affairs, explained the constructive role of UNDP, in assisting to develop Guyana’s governance practices, and in sponsoring programs that address some of the UN sustainable development goals.

Dr. Lopez-Calva, a Mexico-born economist, has been a former senior World Bank advisor, and the lead author of the 2017 World Development Report on “Governance and the Law”.

He has also been the Chairman of the Network on Inequality and Poverty in the Latin American and Caribbean Economic Association.