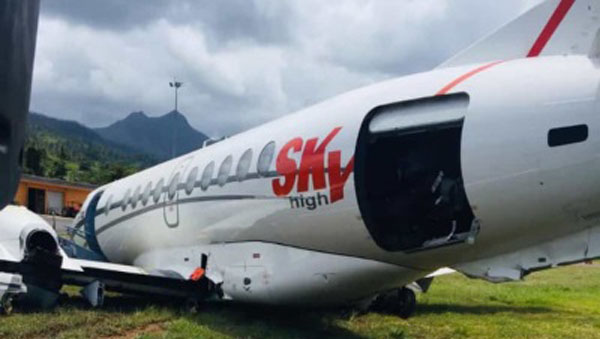 Airport In Dominica Remains Closed As Probe Gets Underway, After Plane Crashed

A statement, from the Ministry of Public Works, Water Resource Management and Ports, said that the investigators, from the Eastern Caribbean Civil Aviation Authority (ECCAA), arrived here, today, to probe the incident that involved the Dominican Republic-based aircraft, which had 32 people on board, including three crew members.

“We expect that once ECCAA officials give the all clear, normal Airport operations will resume, hopefully, by early afternoon, on Tuesday April 9, 2019. Dominica Air and Sea Port Authority (DASPA) will continue to monitor the situation and advise the general public, accordingly,” the statement said.

It revealed that the aircraft, with registration marks, HL1038,  had touchdown about 135 feet from the threshold markings, and the left landing gear collapsed, soon after landing.

“The aircraft veered towards the left side of the runway and the other landing gear collapsed. The aircraft then stopped in the grass area, between the taxiways B and A.  A small fire on the aircraft was quickly extinguished by Government’s Fire Services,” the government statement added.

It said that the three-member crew and the 29 passengers exited the aircraft that had arrived here, from Santo Domingo, and were escorted to the airport terminal for further medical examination. No major injuries were recorded at that time.

“Given the position of the aircraft, between taxiway A and B, and the proximity to the runway, the ECCAA officials, in Antigua, advised that Douglas Charles Airport remains closed until they have completed their investigation.

“The Ministry of Public Works, Water Resource Management and Ports, and DASPA express gratitude to the Fire Services for their swift action, in extinguishing the small fire, as well as the management and staff of Douglas Charles Airport and other agencies, for their support in a very challenging situation.

“We are indeed thankful that, despite the damage to the aircraft, the passengers and crew walked out of the aircraft, without any visible injuries,” the government statement added.