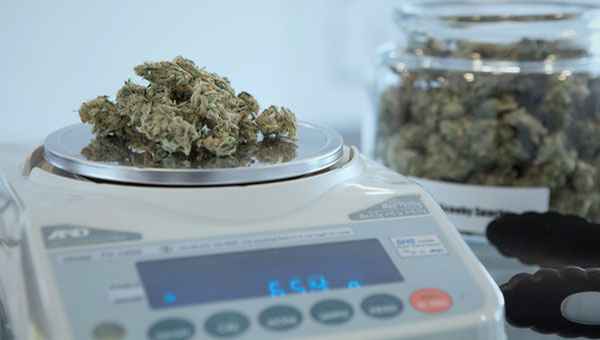 Similarly, Health Canada, last week, claimed “there is not — as some have suggested — a national shortage of supply of cannabis”. It earlier had bragged that January’s dry (smoke-able) cannabis inventories were so large, they equalled “19 times the amount sold”.

But the government’s own data shows it’s blowing smoke.

Altogether, just around 15 percent of cannabis sold in Canada is legal. Even provinces, with relatively plentiful stores, have legal shares of only about 29 percent.

Such widespread weakness can’t be solely due to some provinces having “difficulties” with “distribution systems”, as Blair has claimed. But neither he, nor Health Canada, has offered better explanations. That department collects extensive industry data but keeps most numbers secret. It publishes only inventory and sales totals. Fortunately, we can learn much from those. 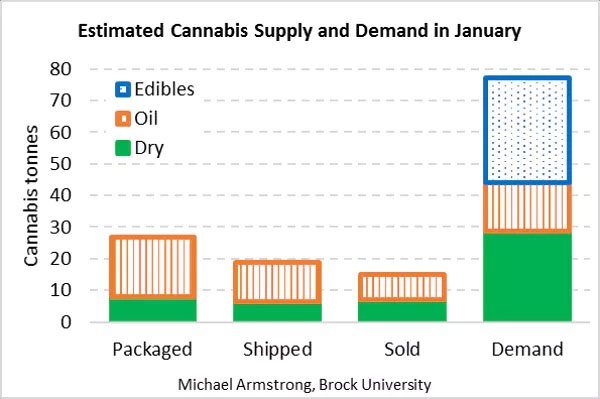 Tonnes of cannabis, packaged by producers, shipped by producers or sold to consumers, compared to demand, in January 2019. Combines recreational and medical products. Estimated by author from Health Canada data. Credit: Michael Armstrong.

Falling shipments
For example, in January retailers sold 5.3 tonnes of recreational dry cannabis, while their inventory decreased 0.5 tonnes. So, they must have received just 4.8 tonnes of new product from producers. (Another 1.8 tonnes went directly from producers to medical clients.)

That implies retailers didn’t sell much dry cannabis in January because they didn’t receive much. January’s dry shipments to retailers were 21 per cent lower than December’s, which were already lower than November’s.

And retailers got little in January because producers processed little in December. Another inventory comparison suggests producers packaged just 6.3 tonnes of dry products that month. That’s only three-quarters of November’s rate. And inadequate to support existing sales. (It was December’s data that Blair claimed showed supplies are “sufficient.”)

This wasn’t a temporary shortfall. The average monthly packaging rate from November to January for dry cannabis products was around 7.6 tonnes. 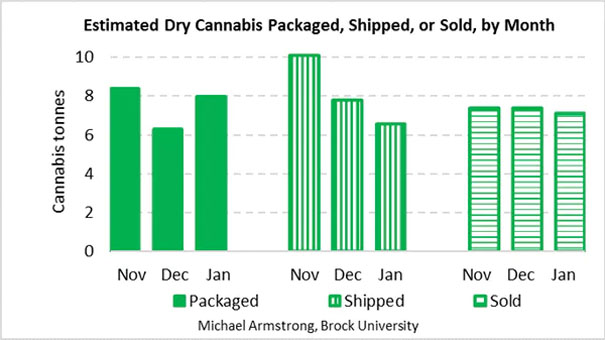 Those inventories were mostly raw material or work-in-process: unfinished cannabis drying, curing, or awaiting processing. Only 15 per cent was finished product, and less than half of that was at retailers. And existing sales are too weak to be worth targeting.

(Besides, inventory-to-sales ratios indicate little about availability. In some sectors, retailers hold less than two months of inventory.)

There’s another reason the latter fraction is low. The federal government hasn’t yet legalized cannabis foods and drinks. Those edibles constitute 43 per cent of sales in Colorado, California and Oregon. Their absence here leaves a big gap.

Producers are already making progress. Canada now has 164 licensed sellers, with hundreds more reportedly on the way. Total cultivation area rose 20 percent in December alone. But it takes months for new sites to grow, process and ship cannabis to stores.

Retailers too, are finally making progress in Ontario. They’ll make legal cannabis more available and therefore more competitive with black markets. Given Québec’s results, Ontario’s first shops might average around $1.25 million in monthly sales, each. Individual store’s results naturally will depend on location — and on the shortages it encounters. I wish them all the best.