New in Pride
Home / International News / India: What’s At Stake In The 2019 Elections 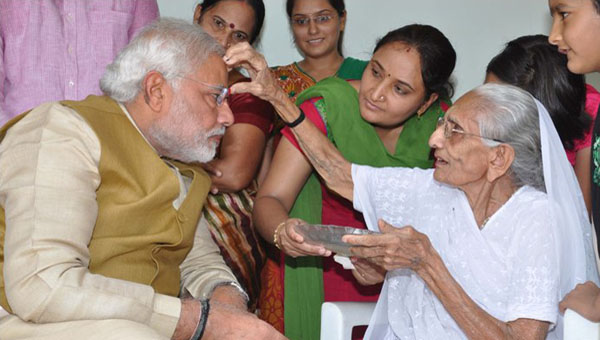 India's Prime Minister, Narendra Modi, gets a spiritual blessing from his mother, after his victory in the 2014 Elections. Photo credit: Prime Minister's Office, government of India.

India: What’s At Stake In The 2019 Elections

Indians are about to start voting in the world’s largest democratic exercise. The country’s 900m registered voters will vote in national elections between April 11 and May 19 across 1m polling stations in 543 constituencies. India has a Westminster-style parliamentary democracy with voters electing their representatives to India’s lower house of parliament, the Lok Sabha. Voting has been staggered over seven phases to ensure that the electoral process is provided the necessary security. The results will be declared on May 23.

India’s current prime minister, Narendra Modi, is up for re-election as the head of the Hindu nationalist Bharatiya Janata Party (BJP) and its allies the National Democratic Alliance. A polarising figure, opinions diverge sharply over Modi’s record in government and his legacy.

Supporters insist that Modi has ushered in economic development, military strength, national pride and a sense of confidence among the country’s Hindu majority. Critics challenge such claims, pointing to soaring unemployment (the worst in 45 years), agrarian distress, reassertion of caste privilege and social polarisation.

Modi faces a range of opposition forces. The principle opposition is provided by the Congress Party and its allies, the United Progressive Alliance. Other opponents include regional parties in different states, such as Uttar Pradesh, West Bengal and Andhra Pradesh, as well as leftist parties in the state of Kerala. The BJP and its allies enjoy a crushing majority in the Lok Sabha, controlling 336 of the 543 seats: the BJP alone has 268 seats.

Fears abound that Modi’s re-election will rent asunder India’s constitutional values and social fabric. Since the BJP’s ascension to power, lynchings of social minorities, especially Dalits and Muslims, have been on the rise. Leaders of India’s historically oppressed Dalit communities remain anxious that the BJP seeks to dismantle the affirmative actions for oppressed populations guaranteed by the Indian constitution. The very idea of India is at stake.

A thriving democracy
When India became independent in 1947, few people expected the country to survive. Nevertheless, Indians introduced universal adult suffrage soon after obtaining independence and adopted a republican constitution in 1950, a full 15 years before economic superpowers such as the US lifted literacy and tax qualifications for voting.

Throughout the 1950s and 1960s international observers remained sceptical of India surviving as a democracy, given its huge levels of poverty and illiteracy. Yet, India not only survived but also emerged – warts and all – as one of the world’s most thriving democracies. The country presents a very moving story of the ways in which some of the poorest people on the planet have sought to construct and sustain democracy against enormous odds. Their achievements are under threat today.

India poignantly illustrates the global challenges posed to democracy by the rise of nationalism and populism. Identity politics, or a politics that focuses on people’s particular social identities, permeates political narratives in India as elsewhere in the world in 2019. Indians are faced with an idea of nationalism that seeks to exclude significant sections of their own population from its ambit. And they have borne the brunt of right-wing populism, as shown by the growth of cow-protection squads administering vigilante justice over the last few years.

Social identity provides the basis of political mobilisation. India today faces these challenges alongside countries such as Brazil, Turkey, the US and various European countries. Modi joins a galaxy of strongmen politicians such as Brazil’s Jair Bolsonaro, Turkey’s Recep Tayyip Erdoğan, the US’s Donald Trump and Hungary’s Viktor Orbán, accused of rolling back democratic achievements of the last few decades.

How Indians respond to the challenges of exclusionary nationalism, right-wing populism and supremacist identity politics in the 2019 elections holds key lessons for the world as it confronts the global backsliding of democracy. After all, elections provide a window onto the hopes harboured by citizens, the anxieties they confront and the possibilities they imagine. The narratives that emerge prior to, during, and immediately after any elections offer unique insights into ongoing processes of social change.

India Tomorrow
It is into these imaginations, narratives and social processes, rather than the machinations of the different political parties, that The Conversation will delve over the next few weeks.

In a seven part series, India Tomorrow, from The Anthill podcast, The Conversation will explore the ways in which nationalism and populism are playing out in India as the country heads to polls. We will be speaking to academics from around the world to help illuminate the topics that are not only key to the forthcoming elections but offer an insight into the social upheaval Indians are experiencing in the 21st century.

You can listen to the trailer for India Tomorrow here, and also sign up to The Anthill newsletter to get an email about each new episode. Do get in touch with any questions via podcast@theconversation.com or reach out on Twitter @anthillpod.

Indrajit Roy is a Lecturer in Global Development Politics at the University of York.