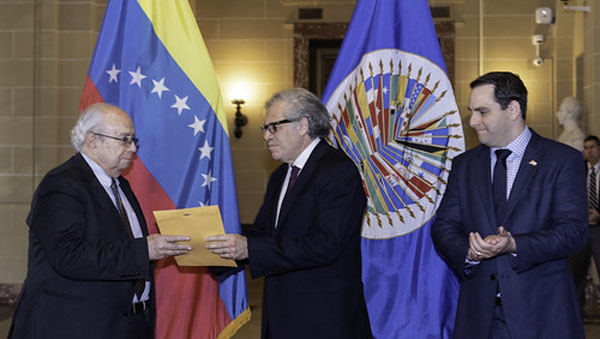 WASHINGTON, District of Columbia April 12, 2019 (CMC) – The new Permanent Representative of Venezuela to the Organization of American States (OAS), Gustavo Tarre, has presented his credentials to the Secretary General, Luis Almagro, who has promised to work with him “to deepen the path to democratization, peace and justice for Venezuela”.

Almargo said that earlier this week, the “voices in favour of democracy in the hemisphere”, voted for the resolution that accepted Tarre’s appointment.

Caribbean Community (CARICOM) countries, with 14 votes in the OAS, were divided on the issue, with St. Lucia, Jamaica, Haiti and the Bahamas voting in favour of accepting Tarre, “as the National Assembly’s designated permanent representative, pending new elections and the appointment of a democratically-elected government”, in  the South American country.

But Antigua and Barbuda, Dominica, Grenada, St. Vincent and the Grenadines, and Suriname, joined Venezuela, in voting against the measure, while Barbados, Guyana, St. Kitts- Nevis, and Trinidad and Tobago abstained. Belize was the only CARICOM country absent when the vote was taken, on Tuesday.

The OAS Permanent Council is chaired by the United States, which is at the forefront of efforts to remove President Nicolas Maduro — who was sworn into office, for a second consecutive term, earlier this year — from power.

CARICOM has adopted a united position on the Venezuelan matter, and in February, the regional leaders, at their inter-sessional summit, in St. Kitts-Nevis, reiterated their position of non-interference in the internal affairs of Venezuela.

At the time, they said they were prepared to mediate in the process to bring about a peaceful resolution to the crisis.

However, St. Lucia, the Bahamas, Haiti and Jamaica, have supported the so-called Lima Group that is seeking Maduro’s removal. This is the third occasion, so far this year, they have broken ranks within CARICOM, on the Venezuelan issue.

In his statement at the ceremony, Tarré spoke of the efforts, by Almagro, and the step taken by the Permanent Council, in recognizing him in his post.

“Yesterday the usurpation ended, with regard to the chair of Venezuela, now we will work for a transition government and free elections,” he said.