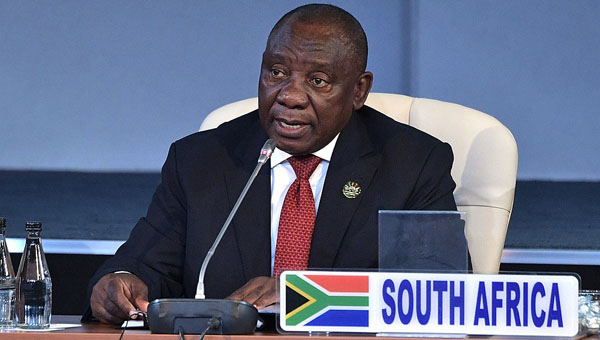 South Africa's President, Matamela Cyril Ramaphosa, at the 10th BRICS summit that was held in Johannesburg, South Africa, between July 25-27, last year. The BRICS summit is an international relations conference, attended by the heads of state or heads of government of the five member states: Brazil, Russia, India, China and South Africa. Photo by Kremlin.ru, CC BY 4.0, https://commons.wikimedia.org/w/index.php?curid=71143608.

South African “Alienophobia” Should Be Condemned — And Stopped

In the 1990s, I resided in the area in Lusaka, Zambia’s Capital, in the flats (apartment buildings) previously occupied by the leaders of the South African National Congress (ANC).

It is believed that all the giants of South Africa’s political struggles, including Thabo Mbeki, Jacob Zuma, Nelson Mandela, and many other icons, took refuge there, at some point. Zambia and other African countries generously helped, sometimes with their own blood, to free South Africa from Apartheid’s brutality.

Why are we today, reading and witnessing a blatant lack of gratitude from the Black South African government of Matamela Cyril Ramaphosa?

When President Ramaphosa succeeded Jacob Zuma in 2018, he was hailed as a saviour. He had vowed to work for the ordinary citizen, root out the country’s corruption and curb the gaping inequality that continue to infuriate millions of South Africans.

Now, the president seems to be sanctioning a form of debilitating xenophobia, I can only dub, “Alienophobia”, or a deluded fear of, and subsequent termination of, Black foreigners in South Africa.

Disgruntled South Africans blame foreigners or “Kwerekweres” for their miseries. They want to violently attack and kill any Kwerekwere, who fails to leave South Africa by May 13, 2019 — the culminating Monday after the elections on May 8, 2019.

We cannot overlook or ignore what is brewing, underneath South Africa. Hate is blind to reason. The South African government should not only protect foreigners from the hooligans, but also, under international law, the nation has an obligation to do so.

Like the White Supremacists in the USA, the South African Alienphobes believe that the foreigners are responsible for their poverty and lack of employment. This cannot be too far from the truth.

It is a clear disregard and willful blindness to the history of South Africa. And it is not my intention to re-lecture South Africans about their own history. It is, however, important to learn from general African history, in terms of genocides and violence.

We all remember the genocide in Rwanda. The Rwandan genocide by the Hutu majority government, between April and July 1994, was a blood-bath, a brutal slaughter of the Tutsis in Rwanda, during the 1990s Rwandan Civil War.

In that slaughter, within three months, close to one million people were murdered. This was while the world watched. Both the UN and OAU (currently African Union – AU) were flatly impotent. African nations watched, and so did the West. No matter the excuse or justification, the world let the Tutsis down.

We cannot overlook or ignore what is brewing, underneath South Africa. Hate is blind to reason. The South African government should not only protect foreigners from the hooligans, but also, under international law, the nation has an obligation to do so.

Where the South African government fails its duty, the UN should exercise its Responsibility to Protect (R2P) mandate. The regional organizations in Africa, as well as the AU, should speak out, directly and strongly, against the pending atrocities of innocent foreigners in South Africa.

President Ramaphosa may easily win the re-election, but at what expense. Mr. Ramaphosa understands better, what Nelson Mandela did and stood for. The president should not sacrifice principle for blood.

The Good Book is speaking to South Africa: “The foreigner, residing among you, must be treated as your native-born. Love them as yourself, for you were foreigners [under Apartheid],” (Leviticus 19:34).