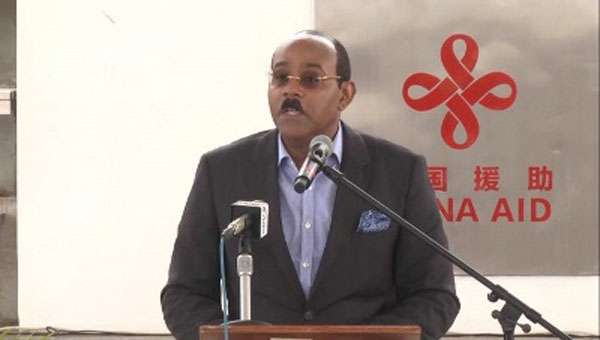 ST. JOHN’S, Antigua and Barbuda, April 17, 2019 (CMC) – Antigua and Barbuda’s Prime Minister, Gaston Browne, has again criticised the position of the United States, regarding China’s assistance program to the region, saying that Beijing is providing loans, at even better rates than the World Bank.

This is the second time, within a seven-month period, that Browne has publicly criticised US Secretary of State, Mike Pompeo, who has likened China to a predatory leader.

But speaking at the handover ceremony for the Grays Green Community Centre, which was funded by Beijing, Browne said he had “gone as far rebutting” Pompeo, to tell him that Washington’s position, regarding China, “was not so, and called upon him and the United States to put a framework in place, so that developing countries could benefit similarly to what the People’s Republic of China is doing”.

“I am pleased to announce that, just yesterday, there was a release, coming from the OPEC organization, in which they reckon that they will form this tropical arrangement, between OPEC, Canada and the European Union, to put together a better developmental paradigm, to assist developing countries in the world,” the prime minister revealed.

Browne said that the World Bank, a developmental lending agency, cannot even match the lending rates, being provided by China.

He disclosed that Beijing extends loans, for up to 20 years, with a five year’s moratorium at two percent interest and, “not even the World Bank, as a developmental institution, (provides) that type of concessional funding”.

“Not even during a disaster, because when Barbuda got decimated by Hurricane Irma (2017), the World Bank agreed to come to our rescue and we engaged them. They offered us a loan, of up to 40 million dollars, over 10 years, at four percent; we said to them, the term is too short, interest too high.

“They said to us, if we want better terms, we had to get a donor to give us 20 million dollars, so that they can write down their terms, probably maybe down to  one percent, over 20 years,” Browne told the ceremony.

He added that various projects, here, have been made possible, through grant funding from China, in an effort to demonstrate its willingness to assist developing countries, globally.

“Currently, there are two clinics being built; one in Villa and one in Wilikies, at a cost, in excess of 10 million US dollars, grant monies again, and the best is yet to come,” Browne said, as he alluded to the funds,  made available to assist the island with its housing challenges.

“The People’s Republic of China has approved a grant of 90 million dollars to help us to provide social housing for the people of Antigua and Barbuda, so we can build more resultant homes. Are those the practices of a predatory government?

I say to you, those are the practices of a caring government, a government that understands the needs of the developing countries, globally, and would have gone the extra mile to help us to build capacity, literally in all aspects of our development,” Browne argued.

Pompey had warned countries against accepting gifts from Beijing, urging them to be wary of Chinese companies coming with projects that seem too good to be true.

But Prime Minister Browne said that Beijing had played a significant role, over the years, in the socio-economic development of Caribbean countries and that Washington would do well to follow suit and stop wasting resources on useless wars.

“Those who are opposed to China’s deepening influence in the hemisphere need to talk less and perhaps they need to put some diplomatic dollars or development assistance…on the table,” he said then.