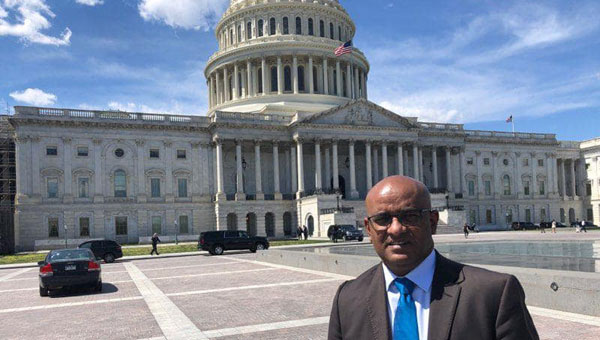 Guyana's Opposition Leader, Bharrat Jagdeo, seen, recently, in Washington, DC, in front of the domed United States Capitol Building, the home of the US Congress and the seat of the legislative branch of the federal government. Photo courtesy of the PPP.

GEORGETOWN, Guyana, April 17, 2019 (CMC) – Guyana’s Opposition Leader, Bharrat Jagdeo, said, today, he would make a formal response, in writing, to allegations, being investigated by the Guyana Police Force (GPF), that he, allegedly, incited supporters at a rally, last month.

Jagdeo, who is also the General Secretary of the main opposition, People’s Progressive Party (PPP), was flanked by his attorneys, Anil Nandlall and Sanjeev Datadin, when the police came to his office, to seek his response to the allegations.

The police indicated they are investigating a report that, on March 10 — at the Cheddi Jagan commemorative ceremony at Babu Jaan, Port Mourant — the Opposition Leader had said that “after the 21st of March, the government would be illegal and that if the President, David Granger, (Prime Minister Moses Nagamootoo), if they come here, to chase them…because they are illegal”.

The police said that Jagdeo is also alleged to have referred to Granger, Nagamootoo and another senior government minister as “jackasses”.

The police told Jagdeo, who just returned from a trip to the US, that he was free to either give his response in writing or orally, but the Opposition Leader, smiling, replied, “I am tempted to give you an explanation, because I do believe that there’s strong justification for everything that I said. But I will prefer to just give you a written statement. We will give you a written statement…that will be prepared in a few minutes.”

“Had it not been a legal matter, I would have justified every single word that I uttered there, at Babu Jaan. We are going to get the statement to you, in a few minutes,” he added. 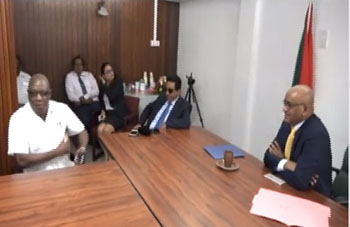 Earlier this week, the PPP had issued a statement that indicated that it was “in receipt of information, from a usually reliable source, that the Guyana Police Force has been instructed, by Congress Place and the Office of the President, to arrest, detain and charge” the Opposition Leader, “with criminal offence(s), under the Racial Hostility Act, Chapter 23:01, for wilfully exciting, or attempting to excite, racial hostility, in relation to a speech, he delivered at Babu Jaan, Port Maurant, Corentyne, on the 11th day of March, 2019”.

The speech was widely covered in the media, and was devoid of any racial content, whatsoever, the statement outlined, adding “It simply called upon all Guyanese to reject the government, including the President and the Prime Minister, after March 21, 2019, ‘by chasing them’, since as from that date, the government would have become illegal”.

The statement explained that “the President, the Prime Minister and Ministers of the Government would no longer be lawfully entitled to hold their governmental offices, because of the successful passage of a no confidence motion, passed against the Government, in the National Assembly on the 21st December, 2019, and the ruling of the Chief Justice which upheld the validity of that no confidence motion”.

It emphasized that Jagdeo “directed his comments to both the President and the Prime Minister and, in fact, the entire Government, and his appeal was to ALL Guyanese. It is therefore bewildering, how these comments can be interpreted as conveying any racial sentiments whatsoever”.

The PPP maintains that its General Secretary has “done nothing other than exercise his democratic, constitutional and political right, to be critical of a Government that has flagrantly violated the constitution, and would have been occupying governmental office, unconstitutionally, tyrannically and undemocratically”.

“In fact, the duties of the Leader of the Opposition include publicly exposing the vulgar constitutional violations, being committed by the Government,” the opposition party said.

“What we are witnessing is the unleashing of state power, through the medium of the Guyana Police Force and the GNBA, to stifle free speech, to assault democracy and abrogate political rights and freedoms,” the PPP contended.

“This repeated, repressive use of the criminal justice system and the state machinery, is intended to restrict the Opposition’s rights and freedom to expose the authoritarian actions of this Government, internationally.

“It is therefore no coincidence that these actions are being taken, after the return of the Leader of the Opposition from international travels, where he met with important functionaries and spoke, widely, with the media, in both the Caribbean and the United States, in relation to the despotic behaviour of the Government,” disclosed the main opposition party, adding “We call upon the diplomatic and international community to note Guyana’s rapid descent into a police state.”

In conclusion the PPP statement offered: “Finally, we wish to assure the Government that we will not be intimidated, but will continue to work to bring Guyana back to a democratic course, as we strive for a better and more united country.”