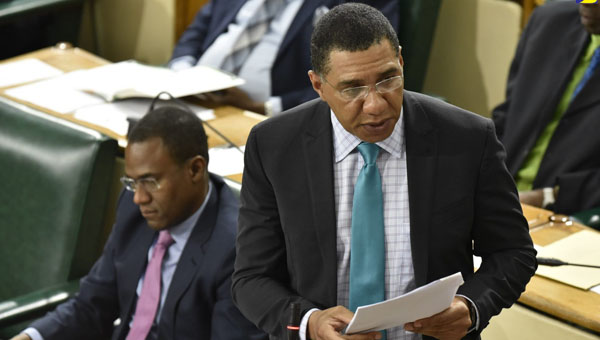 Jamaica Government To Roll Out More Zones Of Special Operations

KINGSTON, Jamaica, April 17, 2019 (CMC) – The Jamaica government says it is preparing to roll out more  Zones of Special Operations (ZOSO), after the Parliament approved two resolutions, yesterday, extending the ZOSOs in Mount Salem, St. James, and Denham Town, West Kingston, for another 60 days.

“We have reached a point, where we believe that we have perfected the operations of the Zones of Special Operations, and we are now ready to declare in other communities,” Prime Minister, Andrew Holness, told legislators, noting, “in short order, announcements will be made, about the declaration of other communities”.

He revealed that his administration has engaged a strategy of training, incorporating the Jamaica National Service Corps (JNSC), to rapidly boost the Jamaica Defence Force (JDF) personnel.

“Some of those members will, ultimately, find their way through the recruitment process into the Jamaica Constabulary Force (JCF). So we are using the JNSC as a mechanism to increase the manpower of the Force, so that we can [implement] more of these Zones of Special Operations,” Prime Minister Holness stated.

Holness announced that budgetary allocations, to undertake additional ZOSOs, have been earmarked, adding that the logistics, being worked out, is how to deploy members of the security forces, without depriving communities of their services.

“We are working out the manpower allocation, so we, in no way, deprive any area of their presence. That is the only issue that has really prevented us from declaring [additional] Zones earlier,” he explained.

A ZOSO can be declared under the Law Reform (Zones of Special Operations) (Special Security and Community Development Measures) Act.

The law seeks to contain crime, while safeguarding the human rights of residents, and promoting community development, through social-intervention initiatives, in areas where a Zone is declared.

Opposition Leader, Dr. Peter Phillips, welcomed the government’s decision to extend the ZOSOs into other communities, and Opposition legislator, Derrick Kellier, has called on the government to include the Greater Cambridge area of the St James Southern constituency.

“Your security minister, and my colleague MP from St. James, are aware of the devastation to the Greater Cambridge community that has carried on, for far too long now,” said Kellier, adding “one of the most notorious gangsters that is on the most wanted list, is still not caught”.

“Two others were taken out by the security forces, but the number one man is still around the place, and his cohorts are still there.

“It is said that there are guns everywhere, and we hear them firing at nights, so we know they are there. But the truth of the matter is, Prime Minister, the area needs to have that intervention, because the social decay that has taken place, over the years, needs to be adjusted,” Kellier added.

As of April 6, St. James had recorded at least 42 murders, nearly doubling the 23, reported for the similar period, last year.

Last October, the government announced that it was laying the groundwork to roll out ZOSOs in 20 crime hotspots. ZOSOs have been in place for 577 and 532 days, respectively, in Mount Salem and Denham Town, and Holness said that since then, no murder has been recorded in Mount Salem, while Denham has seen homicides slashed from 31 to 12.

“So it is clear, Mr Speaker, that the zone of special operations is working, very effectively. There is no question about the success of the strategy,” he told Parliament.