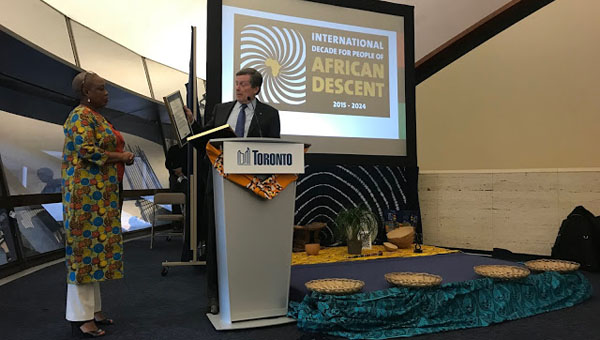 Mayor John Tory (right) presents two proclamations, regarding: the UN Decade for People of African Descent, 2015-2024 and International Day of Remembrance of the Victims of Slavery and the Transatlantic Slave Trade, to Aina-Nia Ayo'dele Grant, manager of the City of Toronto's Confronting Anti-Black Racism Unit, at City Hall on March 25. Photo credit: City of Toronto.

TORONTO, Ontario April 18, 2019 — The City of Toronto has formally recognized the United Nations’ Decade for People of African Descent, 2015-2024, and reaffirmed its commitment to its Confronting Anti-Black Racism Plan.

Aina-Nia Ayo’dele Grant, Manager of the city’s Confronting Anti-Black Racism Unit, said in their few months, working at the City of Toronto, they quickly realized that the city had not yet proclaimed its commitment to the International Decade for People of African Descent.

“While the Toronto Action Plan to Confront Anti-Black Racism certainly addresses the themes in the Decade, it does not replace the City’s acknowledgement,” she said, noting that although the acknowledgement was a few months ago, they wanted to do it on March 25 — International Day of Remembrance of the Victims of Slavery and the Transatlantic Slave Trade.

“It’s really important that we don’t forget, why we came here and why we are continuing to do this work.”

She said the day was also chosen to acknowledge those, who have been tirelessly working for justice, recognition and development.

Over 1000 Black Torontonians worked with Grant and Denise Andrea Campbell, Director of Social Policy Analysis and Research, to bring the Action Plan to fruition.

Grant also recognized the Ontario Council of Agencies Serving Immigrants (OCASI) for partnering with the city, for the first phase of this initiative – a public campaign, aimed to provoke conversation about anti-Black racism in Toronto.

She also thanked community conversation-facilitators, who worked with her team, over two-and-a-half months, to have conversations with over 1000 Black Torontonians.

The unit is also working with city staff and leaders to strengthen the city’s abilities and activities, as public servants, to make services, spaces and policies fully inclusive and accessible to Black Torontonians.

Grant noted that the unit is strongly supported by its Partnership and Accountability Circle (PAC).

“I wanted to use this moment to be a moment of thanksgiving, because I don’t want us to miss that we are not here alone, that we’re here, because of Black people’s power. And I want to say that we are already seeing the impact of our work. Tonight is an example of one. We’re seeing that people are asking us, city staff, city leaders are asking us to look at their policies, so they can make sure there is an anti-Black racism analysis in their policies.”

She said they are also being asked to help divisions with service planning and training, and they continue to be consulted by governments, across North America.

Also involved were subject matter experts, who worked with city staff, to create the five-year work plan, researchers, graphic designers, photographers and caterers, Black and Indigenous elders, and others.

Mayor John Tory said the very strong representation of the senior ranks of the public service of the City at the event, was an indication of how important the work of the anti-Black racism team is to the city.

He said the five-year Action Plan was done, on purpose, so there would be “five years of work to do, step by step by step, that we will know, exactly, what we’re doing, going forward; so that we also could be accountable to you and to, I think, a very unique mechanism we’ve set up here, where we have an accountability circle. I think it’s called, where some leaders from the community come together and hold us to account, for what we have done, or not done.”

Mayor Tory presented two proclamations to Grant: one in recognition of the International Decade for People of African Descent, and the other recognizing International Day of Remembrance of the Victims of Slavery and the Transatlantic Slave Trade. 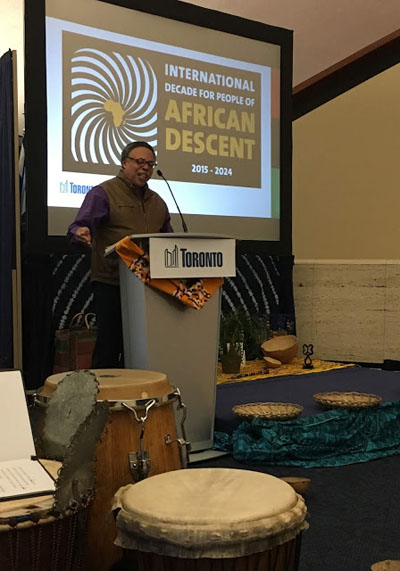 Giuliana Carbone, Deputy City Manager, said it was important to recognize the significance of March 25, to remember and honour the 15 million men, women and children, who were victims of the transatlantic slave trade.

She said it was incumbent on everyone, to understand the present and real dangers, the impacts of racism, discrimination and prejudice that, unfortunately, still exist in the world today.

George Elliott Clarke, the fourth Poet Laureate of Toronto and the seventh Parliamentary/Canadian Poet Laureate, author, playwright and academic, was the keynote speaker.

He opened his presentation, by recognizing the legacy of Black leaders, such as William Peyton Hubbard, Dudley Laws, Charles Roach and Austin Clarke.

He said Austin Clarke’s first novel was entitled “Survivors of the Crossing”, published in 1964, and he suggested that, “today, in remembering the victims of slavery and of the transatlantic slave trade, we’re talking about also the survivors of the crossing”.

Clarke said it also reminds him of the great poet, Derek Walcott, Nobel Laureate, in his book, Omeros, who wrote this line – “But they crossed, they survived. There is the epical splendour.”

He said there is a great need for everyone to recognize the historic, transcendent contributions of people of African descent, and of Africa itself, to the development of modernity, to the development of the Industrial Revolution, to the great leap forward of all of humanity, based on extraction, the forced labour of our ancestors that built up the riches and the wealth of the northern half of the globe — over 400 years of naked, blunt oppression.”

He said the UN declared 1990-2000 the International Decade for the Eradication of Colonialism.

“We still want it to be eradicated, we’d like to eradicate colonialism towards Indigenous People. We’re only just beginning on that road. I want to suggest, right now, that if we really want to take steps, get rid of colonialism within Canada, itself, we need to reopen the Constitution and make Article 1 of the Constitution a recognition of the fundamental indigeneity of this country, and that all of the laws and all of policies enacted, must be interpreted, in light of the fundamental indigeneity of this country and no excuses.”

Clarke said the province proclaimed the Decade for People of African Descent in 2017, but there were no events, funding commitments or actions that were put in place.

“Words are empty, often, too often empty; words are especially empty, if there is no money attached and when there is no policy to direct the expenditure of those monies, on behalf of the citizenry.”

He noted that the federal government recognized the Decade on January 30, 2018 but no funding commitments were announced, until the most recent federal budget on March 19. It announced $25 million, over five years, to support projects that provide support and fund projects to help Black Canadian communities thrive, in recognition of the Decade.

There were a land acknowledgement by Mo Shuriye, a libation ceremony by siphon kwaku, and a performance, entitled “Daughters of the Middle Passage”, by Natasha Eck and Mosa McNeilly. 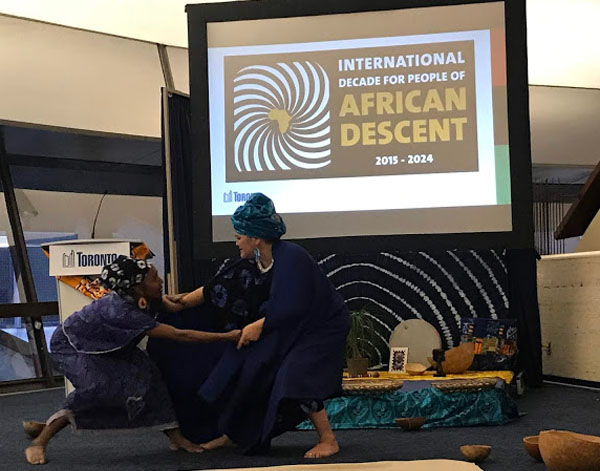 Dancers, Natasha Eck and Mosa McNeilly, performing in Daughters of the Middle Passage at “Blackness and Belonging: Towards Justice, Recognition, and Development”, recognizing the International Decade for People of African Descent at City Hall in Toronto, on March 25, 2019. Photo credit: City of Toronto.

“In proclaiming this Decade, the City joins the global community in recognizing that people of African descent represent a distinct group, whose human rights must be promoted and protected. The Toronto Confronting Anti-Black Racism Plan demonstrates the City’s commitment to the Decade’s themes of recognition, justice and development for People of African descent,” notes the Call of Action, which was presented by Grant and Anthony Morgan, Community Development Officer at the CABR Unit.

The Call of Action continues: “We ask that YOU: 1.) Visit the IDPAD website and the CABR website to learn more, 2.) Read the Toronto Action Plan to Confront Anti-Black Racism and the United Nation’s program of activities for the IDPAD, and 3.) Pledge to take action and share on social media platforms with #IDPADPledge and with the CABR team (@CABR_TORONTO).”

To begin confronting anti-Black racism in Toronto, City Council adopted, on December 5, 2017, the Toronto Action Plan to Confront Anti-Black Racism. This is the result of a collaborative effort, between the City and Torontonians of African descent.

The Action Plan includes 22 recommendations and 80 actions the City pledges to take, to address anti-Black racism.

Dr. Wesley Crichlow, a member of the Anti-Black Racism Partnership & Accountability Circle, which guides and supports the full implementation of the Action Plan, presented the closing remarks.

Reprinted, with permission, from anglescovered.blogspot.com.