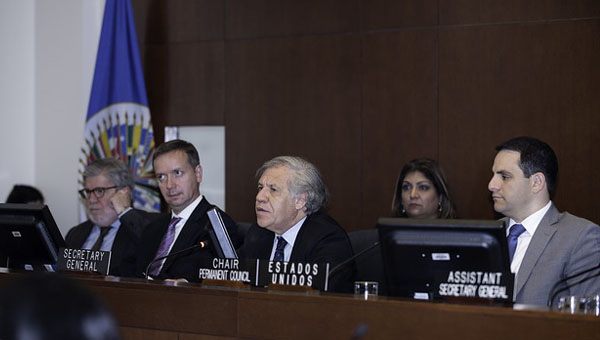 WASHINGTON, D.C. April 24, 2019 (CMC) – Eight Caribbean Community (CARICOM) countries have written to the Chair of the Permanent Council of the Organization of American States (OAS), protesting the decision of  the Council to accept, by simple majority, the appointment of Gustavo Tarre, as the new Permanent Representative of Venezuela to the hemispheric body.

In the April 22 joint letter, a copy of which has been obtained by the Caribbean Media Corporation (CMC), Antigua and Barbuda, Barbados, Belize, Dominica, St. Kitts-Nevis, St. Vincent and the Grenadines, Suriname and Trinidad and Tobago, said they had also taken note that on April 10, the Secretary General, Luis Almagro, accepted the credentials of Tarre, as the “Permanent Representative” of the National Assembly of the Bolivarian Republic of Venezuela.

The Caribbean countries said that they also “endorse” the position of Mexico on the situation.

Earlier this month, Tarre presented his credentials to Almagro, who had promised to work with him “to deepen the path to democratization, peace and justice for Venezuela”.

Almargo had also said that the “voices in favour of democracy in the hemisphere” voted for the resolution that accepted Tarre’s appointment.

CARICOM, with 14 votes in the OAS, was divided on the issue, with St. Lucia, Jamaica, Haiti and the Bahamas voting in favour of accepting Tarre, “as the National Assembly’s designated permanent representative, pending new elections and the appointment of a democratically elected government”, in  the South American country.

But Antigua and Barbuda, Dominica, Grenada, St. Vincent and the Grenadines and Suriname joined Venezuela, in voting against the measure, while Barbados, Guyana, St. Kitts and Nevis, and Trinidad and Tobago abstained. Belize was the only CARICOM country absent, when the vote was taken.

The OAS Permanent Council is chaired by the United States, which is at the forefront of efforts to remove President Nicolas Maduro — who was sworn into office, for a second consecutive term, earlier this year — from power.

Washington wants him replaced by Juan Guaido, the Opposition Leader, who has already declared himself as interim president.

In their letter, the eight CARICOM countries note that the National Assembly of Venezuela “is not a government”, and quotes Article 80 of the OAS Charter, which states in part that “the Permanent Council…is composed of one representative of each member state, especially appointed by the respective government, with the rank of ambassador”.

The Charter also notes that “each government may accredit an acting-representative, as well as such alternates and advisors as it considers necessary”.

Further, the eight Caribbean countries say that the letter of Tarre’s appointment, submitted to the Chair of the OAS Permanent Council, Ambassador Carlos Trujillo, who is also the US ambassador, on April 8, 2019, and signed by Guaido, “in his capacity as the President of the National Assembly and also purporting to be in his capacity as Interim-president of the Bolivarian Republic of Venezuela, was dated January 22, 2019, one day before his proclamation as Interim-President”.

The Caribbean countries also said that Guaido’s designation, of Tarre as the permanent representative, “is also not consistent with the Agreement of the National Assembly of …Venezuela, dated January 22, 2019, which designates …Tarre as “Special representative to the OAS”.

“These inconsistencies call into question the legitimacy of ….Tarre’s appointment, as the designated Permanent Representative of…Venezuela to the OAS,” the letter added.

The eight regional countries say the resolution to accept Tarre, and the subsequent actions “are not in conformity with international law and the normative framework of the OAS”.

“The Permanent Missions thereby express their deep concern with this undermining of the institutional integrity and legitimacy of the OAS, and, in this context, calls for this entire matter…to be submitted, by the Permanent Council, to a Meeting of Consultation of Ministers of Foreign Affairs, for its review and decision,” the letter added.

The Caribbean countries have also called for their letter to be “translated into all official languages and distributed to the members of the Permanent Council”.