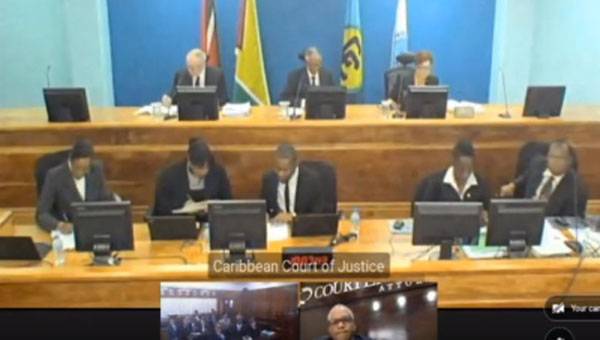 PORT OF SPAIN, Trinidad and Tobago (CMC) — The Trinidad and Tobago-based Caribbean Court of Justice (CCJ) set new dates, today, to hear the appeal of Guyana’s Court of Appeal’s ruling, which invalidated a motion of no confidence that Opposition Leader, Bharrat Jagdeo, had successfully moved in the National Assembly, on December 21, last year.

The substantive matter was originally scheduled to be heard, entirely, on May 10, but following statements, made by Trinidad and Tobago-based Senior Counsel, Douglas Mendes, who is representing Jagdeo; and Belize-based Counsel, Eamon Courtney, who is representing the Attorney General’s Office, it will now be heard, over two days, beginning on May 9.

“This is an important case, it raises some very interesting constitutional issues, and, while we don’t want counsel to prolong the oral arguments, nevertheless it is in our own interest that we should not stifle you, from fully developing points, which you have made in writing,” reasoned CCJ President, Justice Adrian Saunders.

Mendes had told the pre-trial hearing that while the parties, on all sides, had done their best to address the issues, “we really haven’t done so in any great detail, partly because (of), I think, the shortness of the period of time we had to address them, in written submissions”.

“Let me put it this way, if I had had more time I probably would have had much more to say, certainly on those issues (such as) de facto doctrine, the doctrine of necessity, and so on. As it is, we have certainly only been able to deal with them, very briefly,” he said, noting “we will all be hard-pressed to cover the ground, within that short period of time”.

Courtney said he wished to be “associated with the points, made by Mr. Mendes”.

Justice Saunders, who outlined the time schedule for presentations, during the two-days of oral submissions, said that the decision would be taken to start the case on May 9, at 10.00 am (local time).

The Court heard that most of the parties, with the exception of the Guyana Elections Commission (GECOM), would be making oral submissions.

The CCJ had, in March, ordered GECOM to “be joined as a party”, and that the notices of appeal be filed by April 1.

The CCJ, which is Guyana’s highest court, had also ordered that the notices of appeal be served, “forthwith”, on GECOM, by the latest April 5, “and similarly the cross appeals, if any, filed by the appellants, be served, simultaneously”, on GECOM.

All the parties had been ordered to file written submissions, on April 17, with replies by April 23, ahead of today’s pre-trial hearing.

Apart from Jagdeo’s appeal, the CCJ will also hear those, filed by attorney Christopher Ram, against the Attorney General Basil Williams, the minister of state, Joseph Harmon, and Jagdeo, on the same issue.

The Opposition leader is asking the CCJ to throw out the Court of Appeal ruling, and restore the validity of the no confidence motion against the coalition government.

In the application, Jagdeo wants the CCJ to issue an order, setting aside or reversing the ruling by the Court of Appeal, as well as ruling that the December 21 no confidence motion was validly passed, by a majority of all elected members of the National Assembly.

The Opposition Leader also wants the court to declare that 33 votes constitute a majority — within the meaning of the constitution, when it comes to the no confidence motion — and not 34.

The three member Court of Appeal, in a split decision, had ruled that the motion should have been passed, by 34 of the 65 members of the National Assembly, in order to be valid.