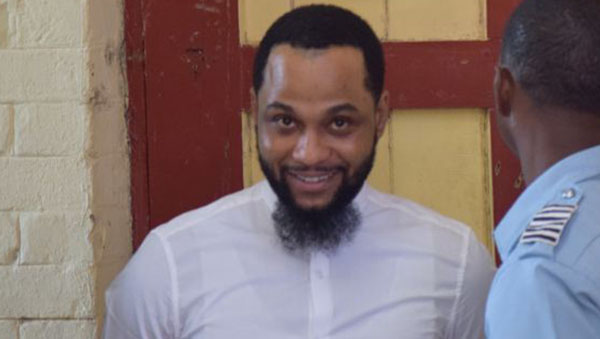 Troy Thomas, who was extradited, from Guyana to New York, on Wednesday, was arraigned yesterday, and "faces a lengthy term of incarceration for his alleged actions”, John M. Ryan, the Chief Assistant District Attorney in Queens, told reporters. So, why in the world, is Thomas smiling? Photo credit: CMC.

QUEENS, New York, April 26, 2019 (CMC) – A Guyanese national, who escaped to his home country, after allegedly killing another man in New York, was arraigned, yesterday, in the Queens Criminal Court in New York.

Troy Thomas, 33, who was charged with the shooting death of Keith Frank in December 11, 2011, in the Richmond Hill section of Queens, New York, was arraigned, after he was extradited from Guyana, late Wednesday, less than two weeks after a High Court judge ruled that there was sufficient evidence for him to face the charge in the United States.

Thomas, who had been arrested just over a year ago, in March 2018, had made several attempts, through the courts, to block the extradition.

Indicted in 2012, by the Queens District Attorney’s Office, Thomas is accused of shooting Frank, at a house party in Richmond Hill, but escaped to Guyana, before he could be charged.

“The defendant has been on the run for seven years, but, today, he is in our custody and will answer for the senseless killing of a 20-year-old man in South Richmond Hill, Queens, just before Christmas in 2011,” John M. Ryan, Chief Assistant District Attorney in Queens, told reporters, after Thomas’s arraignment.

“The family of the victim deserves justice for their deceased loved one,” added Ryan, disclosing that Thomas was ordered held, without bail.

“The defendant now faces a lengthy term of incarceration for his alleged actions,” the Queens Chief Assistant District Attorney said.

Ryan said Thomas’s extradition case was the first between the United States and Guyana in recent years.

Sarah-Ann Lynch, the US Ambassador to Guyana, said in a statement, yesterday, that Thomas’s extradition is “the best example of the rule of law existing in Guyana”.