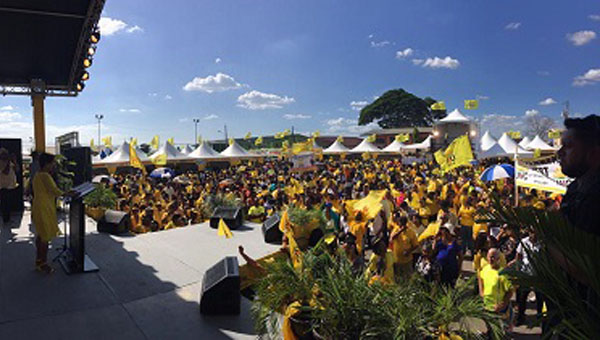 PORT OF SPAIN, Trinidad and Tobago, April 29, 2019 (CMC) – The main opposition United National Congress (UNC) says it is moving to get the courts, here, to set aside the judgment of the Court of Appeal in the results of the 2015 general elections.

Opposition Leader, Kamla Persad Bissessar, addressing the 30th anniversary celebrations of the party on Sunday, said that the hearing is scheduled for June 5.

The UNC, the biggest partner in the then-coalition People’s Partnership government that had governed the country from 2010-2015, had, in petitions, challenged the unilateral decision of the Elections and Boundaries Commission (EBC), to extend the voting period, by one hour, in Trinidad and Tobago, only due to the inclement weather on polling day.

It was challenging the results in six of the constituencies.

“Our lawyers have returned to court, on the 2015 election petitions, to set aside the judgment of the Court of Appeal, on the ground of bias and unfairness.

“The application urges the court to re-open proceedings, as the final arbiter of the electoral petitions, which are of pivotal and political importance, to determine a complaint of bias,” Persad Bissessar said.

She told party supporters, gathered in Central Trinidad, that the party was now into election mode, and that it has already completed the nomination process for the Local Government Elections, with over 400 persons, having filed nominations.

But she said that she wanted to send a warning to Prime Minister, Dr. Keith Rowley, and the PNM, that the UNC is aware “what is going on and what he and his party are planning for elections”.

“And I want to give him the assurance that we have no intention of allowing him, and his cronies, to rig the election now, and use the campaign period as a theatrical show and then relegate election day, as a sham activity, to legitimize electoral democracy in Trinidad and Tobago.

“We in the UNC are not making joke on this matter. We will not allow our electoral system to be subverted, by political interference, nor will we allow democracy in our beloved country, Trinidad and Tobago, to be hijacked by political pirates, posing as an authoritarian government,” Persad Bissessar added.

The Opposition Leader said that if the UNC is returned to power in next year’s general election, it would create 50,000 new jobs, grow the local economy and restructure the health sector to make it a hub for medical tourism.

“We will mandate our foreign missions to identify the jobs of the digital future and prepare you to take them up. We will leverage the expertise in our energy sector and carefully match that with manpower needs in nearby Guyana, to the mutual benefits of both countries,” she added.